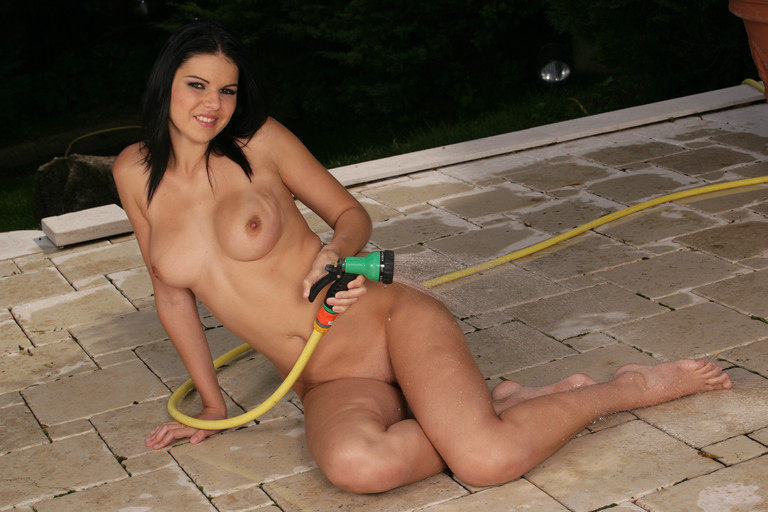 Last summer my friend let me house-sit for her while she went away for the weekend. I don’t know why she didn’t have thoughts of me throwing a wild party or bringing home stray boys to entertain me for the night. Maybe it was her way of giving me some responsibility and forcing me to behave like a mature adult. It worked, kind of. I didn’t have a party… but only because I was too busy playing with her hot 45-year-old neighbor. She doesn’t need to know that though.

After my friend left I sat and watched some TV. Nothing good was on and I was bored out of my mind. It was sunny so I went out to her garden and worked on my tan. I don’t believe in having tan lines so I stripped down, left my clothes in a pile and laid down on a blanket. I must have nodded off for a few minutes because when I opened my eyes a man was standing by the fence and looking over at me. I could hear soft little groaning noises and he was moving a bit. The dirty perv was jerking off while looking at me. I kept my eyes half closed and watched him for a minute. He wasn’t bad-looking and was in good shape. Just he was kind of an older man that I like.

I propped myself up on my elbows and he jumped. Ha, he knew he’d just been caught. His face turned red and he started stammering, trying to find an excuse but couldn’t. I let him suffer for a few seconds then told him to come on over. He looked at me like I was joking. I slid my hand down and began playing with my pussy. He watched as my finger moved in and out. I was so wet that I slid in a second finger. I looked at him and said that it would be a lot more fun if it was his fingers touching me. That did it. He left his garden and a minute later was standing in front of me.

He began thrusting in and out of me. I wanted him deep inside so I raised my hips and hooked my legs around him. This angle was fucking perfect; he kept rubbing against my clit with every push. I clenched my pussy muscles tightly around him and he started to cum. I pressed my legs around him, holding him in place as I rocked against him. I came then put my legs down.  He pulled out of me as I heard a car pull into his driveway. I told him he’d better do his pants up and get back home before his wife wondered where he was.

Check Out These Kinky Sluts!