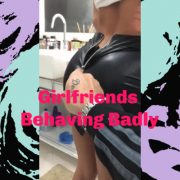 My girlfriend Molly is hot as hell and she loves to show off. I didn’t realize how much she did until she decided to show me what she did when I was busy at work.  Molly happens to be one of those naughty girlfriends. Sitting at work my phone buzzed and an alert came through from Molly. Across the screen was a link and a quick message, Hey babe check this out and a winky face. Beyond the initial surprise, I began recognizing the scene it was my bathroom.

Suddenly music began to play and I saw Molly’s hand come across the screen and turn the water on. Sliding into the shower slowly water began to cascade off her supple skin. She had her back turned to the live stream and was showing off her firm and sexy ass. Swaying it back and forth to the music she grabbed a luffa and poured soap on it and turned around and lathered her body. Then I noticed that these guys watching where paying her for the show. On one hand, this little tease had gotten me hard as hell and on the other, I was jealous that she had been doing this.  Barring my initial feelings, this turned me on wildly and made me want to come home sooner and be in that shower with her.

I knew I had to get home quickly and I did.

I slid into the shower with her when I arrived. Then I began to kiss her soft lips and run my hands over her naked body.  I cupped my hands under her breast and twisted and played with her perky pink nipples. Bring a moan from between her lips I gripped her hips and bent her over sliding myself fully into her warm entrance.  Pounding her in front of the Camera was a thrill of a lifetime to me. Molly and I decided to live stream our sex lives more.

Master Jonesy would have me sit in on their sessions and simultaneously would dominate me as well. While he was kind and strict with Ashleigh he would relish in telling me how much of a pathetic worm I was. Being that I was unable to satisfy my Girlfriend.  As a rule, when Master Jonesy was there I was not allowed to touch myself of Ashleigh.  I began to enjoy being cut off and denied the right to orgasm when I wanted to.  The training I went through when I was allowed to have sex with my naughty girlfriend was better than we had ever imagined.  Our Dom saved our relationship and spiced it up!

Daisy my girlfriend loved to show off her body, be it on Instagram with her thousands of followers or the men that paid to see it.  She always posted photos on both sides with attention to whatever body part she wanted to flaunt Hell, I took over half the photos that she posted.

Daisy decided that she wanted to step up her premium snapchat and include personal videos and not just photos. We decided to make our very own video. Seeing Daisy wearing a tight mint bodysuit that hugged all her curves drove me crazy.  Daisy traced her fingers over the delicate lace detail her nipples reacting to her playfully touch. Soon her sweet pussy began to drip as I record her tracing her fingers up and down her sweet slit.

Daisy reached over to pull out her favorite toy

Suddenly, she had her wireless wand tracing her thighs and over her pussy and down.  At the same time, her other hand was squeezing and fondling her voluptuous tits.  I heard her breath began to hitch as she came closer to her orgasm.  I focused the camera there on her pussy as her thighs shook as she squirted and came loudly on camera. Meanwhile, the toy lay forgotten buzzing on the bed.