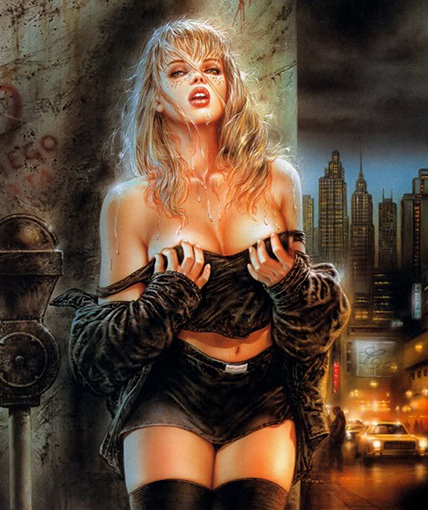 There was a Mysterious Woman in the shadows. She was looking for a man to please.

The air was still, he looked up and saw her emerge from the mist. Her beauty was more than anything he has ever seen before. She was dripping wet from the rain and what little clothes she had on were falling off of her. Her eyes fixated on his and they drew him in. He felt his cock start to grow

in his pants and immediately tried to cover himself. He was engaged to be married within that month. Now his fiancé was a beautiful older woman. They had been engaged for a while now, but she was holding back sex till they were married. The woman just stood there, as if she was trying to look into his mind and learn all of his desired. Then something came over his body. He was drawn to her, he kissed her sweet lips and touched her soft flowing hair. He wanted to pull down his pants, hike up her short skirt and fuck her right there. Right in the middle of that dark alleyway. Just when he was about to take out his already hard and throbbing cock, his phone rang. It was is bride to be, just calling to check in. He talked to her for a moment the did his best to rush her off the phone. But his fiancé just kept going on and on about wedding plans. The mysterious woman and the man could not hold back any longer. So she started to suck his dick. He did his best to not let on to his fiancé what was happening. Surprisingly he was doing pretty well. Well, that was until this woman bent over, pulled down her tiny black thong and showed him her sweet round ass and her pussy lips. Her pussy was already so wet and glistened as the lights of cars shown on it as they drove by. The man hung up and threw his phone to the ground. He was not going to pass up a pussy this tight and pink. He took his dick and started to rub the outside of her pussy, using the head of his cock to teas her clit. Moving it back and forth, up and down, till the tip of his cock was covered in her juices. She reached back and spread apart her ass, so that he could get a better view of her pussy, and also to let him know that he can fuck any hole that he wanted. She grabbed his dick and guided it into her pussy. Throwing her hands up against the wall to get a better grip. A few pedestrians had stopped to watch this old man fucking such a beautiful little slut. Some cheered him on and asked if they could have a turn. But tonight this pussy was all his. He then slipped his cock out of her tight pussy and circled it around her tight little asshole. She moaned a little then started to beg for him to fuck her ass. He gladly accepted her invitation. Her ass was so tight that it did not take him long to cum. When it was all over and done with she slipped her panties in his shirt pocket and gave him a wink. Then walked off into the night. A week or so has gone by and he could not get this mysterious woman out of his head. He was jerking off constantly, he could not keep his dick soft. Just the thought of her made his cock hard. He has just finished jerking off and there was a knock on the door. It was his fiancé. He opened the door and greeted her with a kiss. She smiled and told him that she brought her daughter over for him to meet. That’s when I walked through the door. His jaw dropped. I was the mysterious woman. His dick got instantly hard. I started giggling. Walked over, took his dick in my hand, and shook it like I would if I was shaking his hand and said, “Nice to meet you new step daddy. I think we are going to get along great!”

Want to know what happened next? Give us a call! Let’s play out some fantasy phonesex!  I will let you be my daddy! 😉