My Supernatural Fantasy: I Was Ravaged by Sex Demons on Halloween! 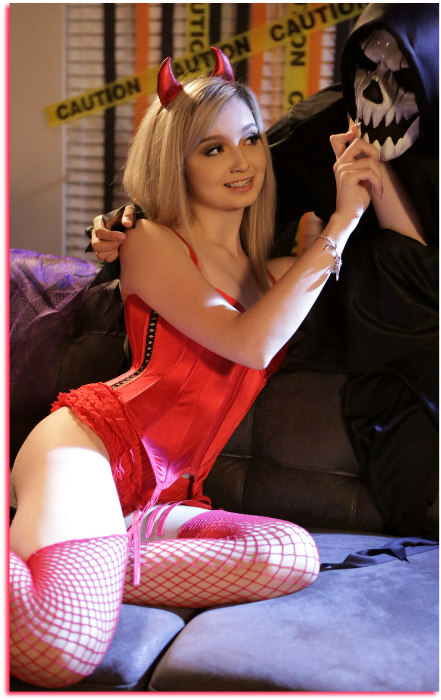 Just after midnight in this supernatural fantasy, Azrael watched the delicious young morsel stumble through the park. In reality, he’d almost resigned himself to the fate of never hunting again. Consequently, his cock throbbed. Additionally, his razor-sharp fangs popped out. As he turned toward his brother, he could barely contain his growing lust.

“Mmm, a human,” the demon said as he licked his lips. Already having spotted the blonde, barely legal college girl, Belphegor grinned. “Indeed, and a foolish one at that.”

As Angel tottered drunkenly out of the nightclub and into the park, she wished she’d left in the taxi with her friends. Since she lived nearby, she’d decided to walk.

Instantly, the two brothers went silent. As she stopped abruptly in the middle of the path, they could taste her fear. Despite the fact that she couldn’t see anything, she knew someone was watching her. As a result, she nearly broke into a run. Instead, she stood frozen as she tried to conceal her panic.

Would this be supernatural fantasy, or a nightmare?

Then she heard a scraping noise, somewhere above her. Immediately, she grabbed her phone. “Just stay calm, it’s fine,” she told herself. “Please pick up, someone! Please-” Her mother’s cheerful voice greeting chimed, then sent her to voicemail. Strangely, it sounded like a nail being driven into a coffin.

“She’s quite the little actress, isn’t she?” Belphegor murmured. In fact, he was oddly fascinated with the girl’s attempts to fool them.

“Yes, agreed. Of course, I particularly enjoyed the ‘Mommy and Daddy’ act,” Azrael grinned wickedly. “By the sound of it, no one is home, brother!” he added, laughing aloud.

The demons laughed aloud at this as they dropped down from the trees, landing swiftly like cats.

My blue eyes darted frantically, back and forth between the two…WTF, men?! To clarify, I’d expected just one attacker to emerge from the shadows. Conversely, two dropped down from the sky! Although I tried to speak, terror choked me.

“Aw. The lady doesn’t seem too pleased to see us, brother,” Azrael smirked as he gave me an alligator grin. “Omg, fuck!” I screamed. Although I wanted to escape, I stood rooted to the spot.

“Certainly, I don’t blame her. However, such VILE language!” Belphegor exclaimed in mock outrage. In the meantime, I gasped as he trailed a wickedly sharp talon over the curve of one pert breast. “Yes indeed,” Azrael snickered. “Perhaps she needs her mouth washed out with … something.” As if to demonstrate, he stepped closer.

“What?! Oh shit, did I just say that out loud?” my brain screamed.

“No, you most assuredly did not,” Azrael answered aloud, grinning. Then, he lazily licked his lips. Specifically, with a black, FORKED tongue.

“Just run, RUN!” I shrieked silently, but it came out in a strangled whimper.

“Of course, please do try to run. After all, it’s been forever since we’ve enjoyed a good chase. Isn’t that right, brother?” Belphegor laughed.

“Too long. Perfect, let’s call your parents again, tiny human. Besides, aren’t they waiting for you?” Azrael’s voice sizzled mockingly. I trembled uncontrollably.

As my back hit the gritty brick wall behind me, two very male, very demonic men stalked forward. Ultimately, I was trapped.

What happened next in this supernatural fantasy? Call my phone sex hotline NOW!

One Reply to “My Supernatural Fantasy: I Was Ravaged by Sex Demons on Halloween!”