Domination Was My Destiny: PART ONE

Sometimes after I’ve finished brutally humiliating a caller, he’ll stick around for some “pillow talk” with his generous Mistress. If he does, our Post-Ass-Stuffing (and OWNING, of course!) Q & A session inevitably leads to this question:

“So, how did you become interested in doing domination?”

Being the hateful bitch that I am, what IMMEDIATELY springs to my mind is some snarky quip like:

“Because it’s OBVIOUSLY my true calling, you STUPID fuck! Some people’s lives have meaning . . . and some of THOSE people — the FEW brave enough to acknowledge their own DIVINITY — realize they are DESTINED for bigger, better things than EVERYONE ELSE! In other words, not DOOMED to being a complacent, miserable, sniveling little BITCH forever — like YOU, for example!”

My actual response is much more coquettish and demure, usually something about how I “have a Napolean complex” because I’m only 5’4″ . . . and sure, my insatiable thirst for power, fame and notoriety might have something to do with all that. But really my sick hunger for total control and utter domination of my submissives, my slaves, has its roots in something VERY different . . .

As a child, I was very close to my mother. I think my sister was always jealous of how close we were — and jealous that my mother saw a potential for something in me that my sister didn’t have: a potential for being trained in the dark arts, the occult, the ancient practices of witchcraft and everything that is truly evil. Well, “evil” depending on who you’re asking, I guess! I think of it more as everything good, everything righteous and necessary in this world . . . everything needed to maintain and restore proper order. . .

My lessons with my beautiful, talented mother came to an abrupt end when she died shortly after my 13th birthday. On her deathbed, she gave me her special deck of tarot cards. A gifted and skilled artist, she had illustrated them herself over a period of years. I keep them close to me wherever I go, and I know that their divine power comes from the dark, evil synergy of my own power and my mother’s, that which she had in her life and the uncontainable, supernatural force that lingers beyond the grave.

I take most of my calls — and ALWAYS all my domination calls — in a special little room in my apartment. I call it the “shrine” room, and its centerpiece is an altar. The cards lie in the center, and it’s adorned with pictures of my mother and her mother before her. I never met my grandmother, but I know that she was also a witch — and I know that thanks to my mother’s training (and my own shameless penchant for depraved kink), I have grown to be more evil, more twisted, more sick, and more powerful than both of them combined . . . I guess you could say I was just naturally “born bad,” huh?

How do I know this for sure? Well, shortly after my mother’s untimely death I began to have some very strange experiences and encounters . . . and by strange, I mean FUCKED UP sexual exchanges involving complete and total mind control and physical domination . . . and torture! 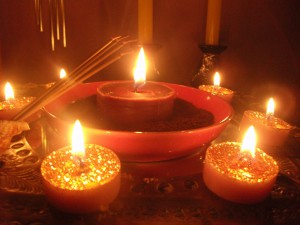