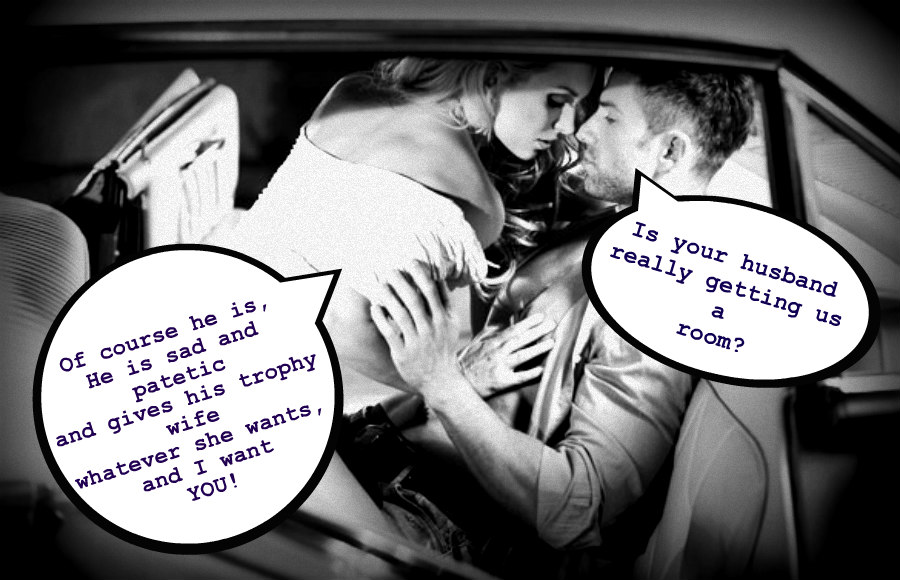 You would think after being married to me for any length of time my husband would know when I said I was going out, that did not mean I wanted him to tag along. Still when the time approached and I was looking sexy and ready for my night of fun he insisted he tag along. I tried to talk him out of it, tried to let him know it was not in his best interest, but still he wanted to come. I figured whatever, if he was so insistent I would at least use his wallet to not only fund my night of fun, but my boy toy’s as well.

When we got to the club he was already waiting for me, Derek. He was every definition of sexy; tall, perfect skin, great hair, and a jumbo sized package. The two of met up on the dance floor and grinding and dancing with each other. Any time we were thirsty we sent our little bitch boy to get us our drinks. When it was time to go he was our chauffeur to the hotel which was great because we were already too hot to focus on things like driving.

With my husband in the driving seat I was free to make out with Derek in the back. Our tongues danced across each other’s. He ran his fingers into my long blonde hair and pulled me closer to him. My hands wandered up his package and I could feel him grown in his pants. Once we got to the hotel we were so rudely interrupted by my husband asking what the next plan was. As Derek kissed along my neck I whimpered out for my husband to get into the hotel and get us a room and come back out once he had it all set!

Sulking he left to go into the hotel and do as I had instructed him. Derek asked if he was really going into the hotel to get a hotel room for us. I was kind of shocked that he doubted my pussy power, especially over someone as pathetic as my husband. But, as we continued to make out and fondle each other’s goodies my husband returned and knocked on the back window that was begging to fog over. He told us he got the room and offered to escort us to it.

The two of us laughed at him as we excited the vehicle. And headed into the hotel towards the room just purchased by my husband. He slid the keycard into the door and held it open for us to walk inside. We continued to giggle as my husband questioned again what his next step should be. As Derek began removing my dress and kissing on my tits I raised my arm and pointed to the corner, “Take off your clothes and yank your cock in the corner like you always do!” I moaned and Derek lifted me up and tossed me onto the bed.

He grabbed my husband by the back of his head and sandwiched his face between his ass cheeks. My husband tried to get free and then Derek said he was being a good little hubby and licking his ass hole. He continued to focus on me, thrusting his hips back and forth he shoved his hard cock in and out of my cunt and it felt amazing.  We switched it up and I rode him. Derek made sure my husband was being put to good use, licking all over his balls. Derek came filling me up with his massive load. Then I gave my husband what he really wanted, to be able to lick my cum filled c