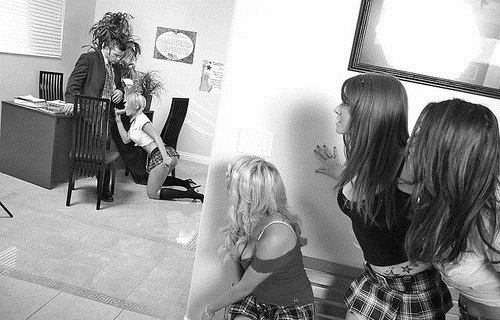 In fact I have a story that I would love to share with you!

From time to time Jen tends to fuck up big time and while I was interning she fucked up really really bad. She had sent out the wrong documents to 2 of the firms biggest clients and in the process broken confidentiality. Her boss was pissed, he was livid, and when his mood took a turn for the worse you always knew it because he would snap at everyone and every little thing would set him off. Jen had rushed off to her lunch break and had decided to ignore me and be a total bitch. I wanted to help her the best I could but Jen was not having it.

Jen walked right past me and the other girls and straight into Mr. Hardton’s office closing the door behind herself. They were in there for a long time and at one point we could hear the shouting and then it had quieted. One of the other interns CeCe actually pressed her ear against the door to listen to what was going on. I was behind her as was Lizzy all of us curious as to what the hell was going on. So CeCe being brave quietly opened the door enough for us to see.

There was my cousin Jen on her knee’s with her lips wrapped around Mr. Hardton’s cock sucking it like the expert cock sucker she’s always been.

Her head bobbing up and down she was too busy to see us and Mr. Hardton didn’t see us either. We watched as she sucked his cock, stroking, and playing with his balls. I knew that he would not be firing Jen and this was the beginning of a long internship and that i’d be seeing more of this in the future.

We all agreed that if Mr. Hardton didn’t give us glowing recommendations we’d leak the footage to his clients but luckily we didn’t need to.