Mud Wrestling With Some Bitch at This Party ♕ 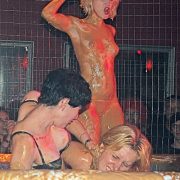 Mud wrestling isn’t how things started, but most definitely is where things finished.  I’m no stranger to parties.  Will there be alcohol, 20+ people, and at least one place to fuck?  I’m there with bells on.  I’ll be there with next to nothing on.  I didn’t grow these huge, fuck bags on my chest only to stuff them in some restrictive bra.  You had better believe I was sporting something akin to nipple tassels, booty shorts, and some 8 inch pumps when I showed up.  But wouldn’t you know it?  Some other bitch had a similar idea with her same set of tits.

There can be only one

Usually, there would be no problem.  With the same goals in mind, she’d stay out of my way, and I’d stay out of her way.  But when our attention fell upon the same man, all bets were off.  I didn’t care if there were plenty of others to pick from.  A bitch has got to guard what’s hers.  Usually, presenting my superior tits is enough to send any wannabe slut running with her tail between her legs.  This triple-D skank was persistent, though.  Our tits pressed against each other as we stared each other down.  Neither of us was about to give up.

A confident smirk crept across that stupid, bimbo face of hers when she felt my nipples getting hard first.  In that instant, I reached down and snatched off her tassels.  She snatched off mine.  Of course, the men in the room went wild as I dragged her outside by her bleach-blind hair.  She tripped me up, though, and I landed tits first into a muddy puddle.  The mud wrestling was on.  I could feel her straddle me and move to pin me there, but I rolled over until I was on top of her and buried the side of her face in the mud.

This bitch had some powerful hips.

She was actually able to buck me off of her.  Me!  I’m not a small woman, yet my thick ass went flying.  One of her friends tried to pull her away from me, but I pushed her friend and grabbed her by her shorts to prevent that.  Down that went, and everybody got to see this bitch’s commando bush.  Tit for tat.  She came at me, determined to do the same.  I held up my shorts as best as I could, but my smooth pussy was now center stage for all to see.

Her friend didn’t take too kindly to my little nudge and joined in on our little mud wrestle.  She got down on her knees to hold my legs open while this blonde whore sat on my chest.

“You want cock?  You fucking got it.”

I didn’t want to believe that I had lost.  She gestured for the guy we were both after to come to her and proceeded to suck his dick while sitting right on top of me!  It wasn’t long until I felt someone else’s cock slide into my soaking wet cunt.  I was getting fucked by a dick I didn’t want while being forced to watch her suck the dick I did want!  So unfair!  She pumped so hard and long on that shaft, make it look so tasty.  God, I wanted some.  I heard him moan, and her cheeks start to puff out.  So much cum!  She was gulping, and still more poured unto her mouth.

She looked down at me

(sigh) So, how was your weekend? See any catfights or mud wrestling?  Call my phone sex line and tell me all about it.