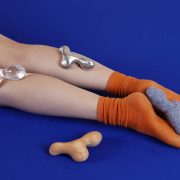 After a lot of back and forth, he admitted to knowing where his mom kept her toys and that he would gladly bring me one if I so desired.  Well, I was hesitant at first, but Genevieve was a clean, Christian woman and I believed her to be safe.  So, after thinking on it for 24 hours I agreed to the strange arrangement.

“My barely legal pussy clenched around the toy”

I laid back on the bed and lifted the oversized t-shirt I wore to sleep.  Slowly, I slipped off the floral bikini I was wearing and tossed them to the floor.  I did not want to think about what I was doing and I knew I just had to go with it.  Gripping the base of this monster cock, I positioned the giant head at my entrance.

My pussy tightened at contact and it took all that I had to calm myself before slowly slipping it in.  My back arched and my knees bent as I fit the first inch and a half inside my tight, wet pussy.  It was a stretch, that was for sure.  But I wasn’t going to give up! Working my clit with my other hand I slowly worked in three more inches.  Let me tell you, I was stuffed! My barely legal pussy clenched around the toy was I found myself with the desperate need to shove it in further.

Ever wonder what sexy college roommates do?