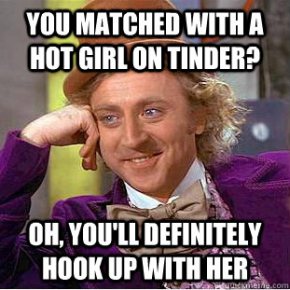 7 years ago
Phone Sex Kingdom,Strap on

Recently, I managed to talk one of my guy friends into making a Tinder profile.  He was extremely resistant to this idea after the bad luck he had spent on sites like Match and Plenty of Fish.  After explaining to him that I was going to be acting as his “virtual wingman”, he agreed to try it out.

So my friend set up his profile and sent over a screenshot to me for approval.  After a few rounds of picture trial-and-error, he was single and ready to mingle!

And this is where things get interesting.  Almost instantly, he had a match and started chatting with this girl and, a week later, they decided to FaceTime… at which point she told him that she “just got Herpes from a guy with a cold sore” who had gone down on her.  Before you call bullshit on this, it can happen and does, more often than you’d think.

Because of this, and despite my protestations, he decided to decline a date with her and keep it to Skype sex.

So if this situation ever arises, here is my PSA on how to have safer sex if either you or your partner has Herpes and is still DTF.

–        First and foremost, whether you/they are on meds or not, avoid any and all sexual contact if you suspect that there is an outbreak coming on.

–        Have specially dedicated “outbreak safe” toys such as a certain colored dildo/vibrator for those times when symptoms are present, and so is your desire to fuck.  This way, you can still have sex during an outbreak!

–        Invest in lubes/foams/etc that have Nonoxynol, which is proven to have some virus-fighting benefits.

–        Lube is your friend!  Lube cuts down on the amount of friction, which causes less skin/viral cells to shed

– Your local Planned Parenthood can provide you with all the safe sex supplies you need if you feel uncomfortable heading over to your favorite sex shop.

So remember, if you want to “seal the deal” don’t “break the seal” 😉