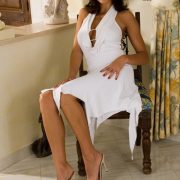 When he saw me, he covered his very nice cock with a pillow. Then as I soothed him, he sobbed out the story of how the girl had come on to him. He had been thrilled to receive the attention of the object of his daydreams.

I slipped my hand down his torso and under the pillow. His head shot up in alarm as I grasped his still stiff cock.

“It’s okay, honey,” I whispered, stroking him gently. “You’re a handsome young stud who shouldn’t have to put up with that from any woman. Most women would be proud to go to bed with you.  I would be.”

“Of course, I would. You have a fine body and I could see you really know how to please a woman.  Now let me show you how a woman can please you.”

I pushed the pillow away and dropped my head to his lap. His involuntary gasp was immediately replaced by a moan as I vacuumed his prick into my mouth. I deep-throated him on the first stroke.

As my nose bottomed out in his pubes, I inhaled the sweet musky smell of youth and was immediately intoxicated. I knew that I was going to do everything for this young stud, and I wanted to because I loved him.

Less than ten quick sucking strokes later, Donavan was spewing his young seed into my mouth. His orgasm came without warning, and actually hit as only the tip of his cock was in my mouth.

My cheeks bulged out with his load,

and I swallowed quickly. Between spurts, I slammed my head back down his shaft and milked him dry with the muscles of my throat.

When his orgasm subsided, I lifted my head and gazed at him. His eyes shone with love and gratitude. Wordlessly I pulled his head to mine and kissed him deeply.

Well, I was never one to deal with paradoxes like that, so I mentally shrugged it off and stuck my tongue nearly down his throat. We broke the kiss and Donavan whispered,

“I love you, son.”  Looking down and, as expected, he was only slightly less hard after he had come than before.  “I can see you’re still turned on.  That’s good because I want to show you so much more.”

“Anything you want, Mom,” he grinned.

“No, dear,” I corrected him gently “anything you want.”

His eyes lifted to meet mine in a loving, imploring look. I stood up then and began to strip.  Within seconds, I was as nude as he. I looked at my loving son, avidly drinking in my firm, mature body.

The change in his face was electrifying.  His eyes lit up and a hungry smile came to his face.  His tongue slipped out, moistening his lips. And he began to look less like a timid youth and more like a hungry wolf.  I loved it.

Donavan was mesmerized by my tits, which are a nice 36DD size. I had always been proud of them. Under his gaze, my nipples hardened out.

I moved to the sofa, planting my knees outside of his thighs and settling my ass down on his lap, his rock hard prick between us.

With that, he buried his head between my breasts and we were off. Then he voraciously licked and sucked the nipples, biting gently. I dropped my hand between us and began rubbing his cock against my very moist pussy lips.

Then he responded by bringing a hand up between my thighs and cupping my pussy with thumb and forefinger. Like a magnet, his thumb beelined for my clit. And soon I was bouncing up and down on his hand like I was riding a horse.

He began a steady pressure upward with his hand. Simultaneously, he began trailing his tongue down my torso. Soon I was fully raised up on my knees, my back arched, pushing my cunt into his face.

He chewed my muff vigorously, and I came like gangbusters. I was in awe of my son’s technique. And I had to have that beautiful cock inside me.  I stood up and pulled him up after me.

We embraced and kissed deeply. I could taste my juices on his lips, and it drove me even wilder. Together we sank down to the carpet. I laid back before him, spreading my legs wide in invitation.

“Oh yeah,’ he groaned as he leaned forward on his knees.

Then I felt his hips between my knees, between my thighs.  I reached forward for his silky-smooth young cock.  As he sank forward, I guided it towards my pussy.  As it slipped through my hand, it left a cool slimy trail of pre-cum across my palm.

He paused as the head hit me square between my pussy lips.  He looked inquiringly at me.  In answer, I raised my palm to my mouth, deliberately licked off his spunk while staring into his eyes, and said

I felt every inch of his young meat slide into me, and I knew I would do anything for his pleasure. As his long strokes brought us each closer to orgasm, I envisioned all the ways I would please him.

I clamped my pussy muscles tighter on my son’s prick. The increased friction brought us both to the edge. Donavan groaned through clenched teeth

Each jerk of his prick increased my orgasm and so on, back and forth, our orgasms building, extending, to a crescendo, then subsiding.

Then Donavan sank into my arms and kissed me as his hard-on subsided within me.  Exhausted, he rolled off me onto his back. I gently bent down and licked our mingled spending’s from his cock.