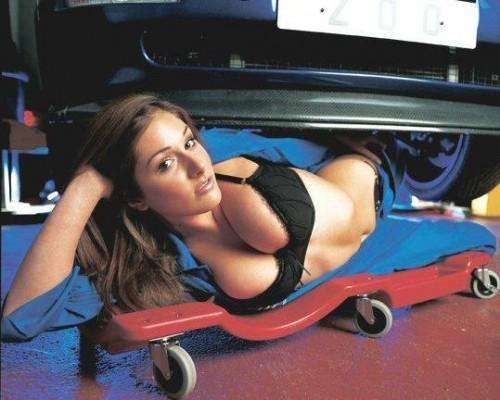 My mechanic tried to explain things but he showed me so much more.

I had to take my car to the mechanic. When my car started giving me issues I took it into a mechanic that my friend recommended. The guy seemed really nice when I met him. He even gave me a car to drive to work for the day while he worked on mine.

I got a call saying he got it all done and I could come get it after work. When I told him the time I got off he said he would wait for me at the shop. When I arrived the place was pretty dark. At first I didn’t think anyone was there. Everything was closed up and I had to knock on the door. Finally a sexy mechanic with a little grease smudged on his face opened up the door for me.

He let me in and started to tell me what was wrong with my car. He brought me out into the garage where it was and showed me some stuff under the hood. I leaned in to try and see what he was pointing at. When I did, I felt him lean over me to point something out but his body pressing against mine had my mind in only one place, his pants.

I could feel his cock against my ass and it was pretty obvious that he felt it too.

It hardened even more as he pressed against me more, moving a little to the side and back to get the rubbing action that he was looking for. Involuntarily my ass pressed back against him and that was the end of it. The flirting turned into an overwhelming urge to do more. His mouth found my neck and started kissing as his hand gripped my tit through my sundress.

As soon as he realized the way my body was positively reacting to him he hiked up my dress and undid his pants. Sliding his cock over my pussy a few times he yanked my panties down and shoved his hard dick into my tight pussy. It had been awhile since I had been fucked so I let out a little scream of pain as his dick penetrated my pussy for the first time in a few months. I couldn’t believe I was getting fucked by my mechanic but damn it felt amazing!