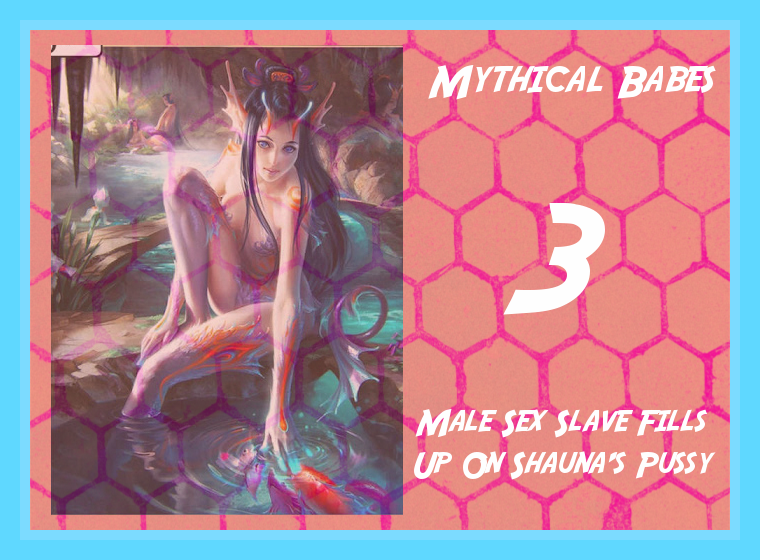 Male sex slaves are very common with merfolk, as Mack was finding out. Sitting next to a man with a fishing wire cock cage and another who looked as though he was there for years made him wonder how long this might continue.  Cecily sat at a dining table with her father, mother, and three sisters.  Each uniquely beautiful, Mack could not help but stare.

“It was so nice of you to drop by with your new toy, sis.”  Mack realized that he was no more than a male sex doll to this twisted and sexy family.  Part of him wondered if this may not be as bad as he thought, but deep down he feared this was only beginning.

The other two men sat with their faces to the ground, as to not catch the attention of Daria, the sister with the highest sex drive.  Poor Mack could not have known that, yet.  She looked him up and down with shiny blue eyes and elbowed Cecily.  The two giggled before Cecily walked over to Mack, putting a pointy nail under his chin.  “My sisters are going to watch you while I go out with my mother.  Do behave, because they are harsher than me.”

Humiliation roleplay is now at the top of my list!

Her sharp teeth were close to his ear when she said that the big girl, Shauna, was in heat and needed her pussy eaten immediately.  Her lover was away today and she needed to get off and release.  Daria questioned if he liked eating pussy, but Mack shook his head no.  He hated it, actually. This was of no concern to the sisters, because they knew as a male sex slave he had no choice.

You’re eating her nectar, but you don’t have to like it.

Forcing his head into the blonde’a cunt slit, he was instructed to slide that tongue up and down. He tasted her salty juices as she began to open up. Suddenly, while his mouth was pressed against her, something slimy fell into his mouth.  Repulsed, Mack spit it out, earning him a big slap from Daria.  What was that, you may ask?  Fish eggs.

“What’s wrong, dumb bitch?  Your kind likes caviar, but you dare to waste Shauna’s prime goo?  You’re eating her nectar, but you don’t have to like it.”

Do you want to be a male sex slave?

As a male sex slave, they were not finished with him.  “You have to clean her out, now.  Her boyfriend hates when she tastes like man cum.”  Mack was repulsed!  He knew she still had eggs in her because he could feel them sliding against his cock!  Shauna was in no mood for games, now.  She grabbed him by his jaw and forced him to swallow every last drop.  After all, that was his job as a sex slave. Now that he was full of her caviar and his tummy bulged,  Shauna could sleep while the other two sisters played.

Come back for part 4 soon, or call me for hot phone sex! Until then, read some other steamy blogs.