Lust in an Elevator 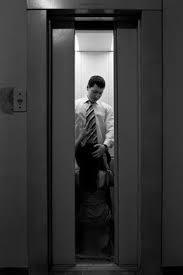 The building where I completed my summer internship contained fifty-two floors.  As you can imagine, the elevators were jam packed every morning, everyone standing shoulder to shoulder, unable to avoid being pressed tightly against each other.  It was difficult to act casual or detached when your body was touching someone else in such an intimate way.  My floor was the thirty-eighth and it took what seemed like hours to reach my destination every morning.

One day, I had special difficulty maneuvering inside the elevator car and had to wedge myself uncomfortably in between two bodies.  I tried to turn to face the front of the car but someone boarded and pushed everyone else in that much tighter so I had no choice but to remain standing, face to face with a middle aged man who looked at first uncomfortable, but then  seemed pleased that I was standing so close to him, practically pushed up against his body.  We smiled awkwardly at each other and I made a clumsy joke about being glad that I had used mouthwash that morning.  As we grew silent and tried to find the right place in front of us on which to focus our eyes, I felt my face begin to redden slightly.

I cleared my throat and nodded.  We rode the rest of the way in silence.  I got off at floor thirty eight, worming my way out carefully.

The following morning, I entered the elevator again and saw the same man as the day before.  He smiled as I made my way inside and without any forethought or planning, I assumed the same position as I had the morning before, facing him rather than facing away from him, most of my body pressed against his, other parts just inches away.

He was obviously delighted.  “Good morning.”  he greeted me with a smile.

“Good morning to you.”  I smiled back.  This time, rather than look past him, I looked into his eyes and moved my hand slowly from my side to the front of my thigh where it lay slightly against the front of pants.  He raised his eyebrows and looked at me questioningly, as if trying to figure out whether or not that was intentional.  My response was to shift my hand so that it was right up against his cock, which reacted to my touch by quickly hardening.  We didn’t move an inch and I think he forgot to breathe.  When we got to my stop, I turned away and felt his deep exhale on my skin as I inched away from him.

This became our morning ritual.  Every day, I was bolder than the previous.  I started off with  slight rubbing against his cock.  After a day or two, I graduated to actually groping and squeezing his bulge through his pants.  Soon, I was jerking his cock from the outside.  He grunted softly and closed his eyes and I could see the beads of sweat forming on his upper lip.  I imagined that he ran into a bathroom stall as soon as he got on his own floor and tugged his cock a few times to release the load he was building every morning after our sexy encounters.

My last day of internship came soon and I really wanted to say goodbye to my elevator friend in a big way.  That morning, I wasted no time.  I pulled his zipper down immediately and slid my hand inside his pants, found the opening of his boxers and my hand was soon wrapped around his hard and throbbing cock.  He shifted slightly and leaned towards me, pressing himself closer against me.  I tugged his cock as inconspicuously as I could, acting as casual as the others in the elevator who were busy staring off into space or checking their text messages.  I pulled and pulled, twisted my hand around and up and down that big, hard cock.  Just before we reached my floor, he spasmed and I was rewarded with a handful of sticky, wet cum.  His eyes widened and he inhaled sharply as I pulled my hand away.  I gave him one last smile, managed to brush my lips against his quickly and exited the elevator, leaving behind a man who was undoubtedly the happiest in the building that day.