I Love Double Penetration Sex! My Fantasy Comes To Life 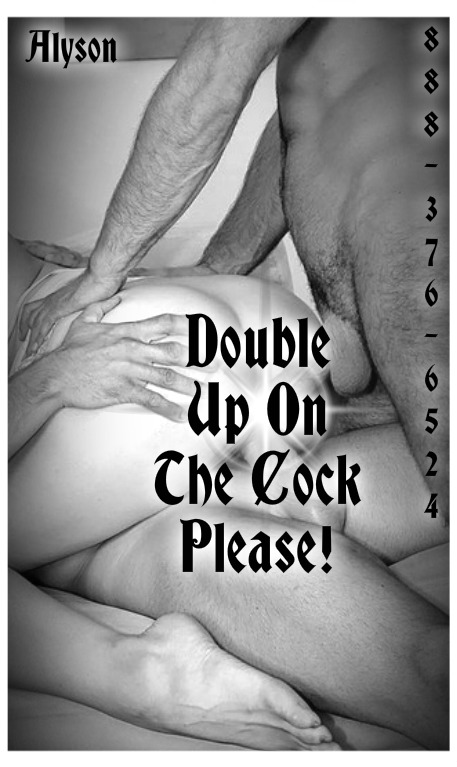 I crave being the girl who has two men vying for my attention. I like giving into both and feeling totally filled like double penetration!

Double penetration is tricky though. You can’t have two gigantic cocks both nailing you at the same time. If you do, you need to be super turned on or have a gallon of lube.

James came over one day with another friend of ours. Eric was the kind of guy I would have sticky wet dreams over. I just never really spoke up much about how gawd damn sexy I thought he was. Eric was kind but had a darkness about him, he was quiet and didn’t smile too much. I was like a true cat always trying to figure out why I couldn’t get his attention.

After we all chilled for awhile, James broke the silence and blurted out how I told him about my fantasy to have two men double penetrate my pussy. WTF! He just said that shit in front of Eric who I already acted like a fuckin retard around. Eric looked at me with his dark eye’s and I could have sworn I saw a tiny smile in them.

James, had a huge grin on his face and looked from Eric to me. “Come on we should help her out man, we’re good buddies. Just cuz’ our dicks rub together inside of her doesn’t men we’re fagots or anything” Said James. Eric kept his eye on me the entire time he spoke to James. He said he would love to stretch me out with James with the agreement he could have me again to himself afterwards.

That was it for me. I instantly had butterflies! “Well we gonna do this or not Aly?” Asked James.  I agreed with a nervous smile. We all went into my bedroom and I started to strip down. Eric seemed less concerned with niceties. He took me by the throat and pushed me onto the bed. He took both of my legs together and pushed them back. He started spanking my ass, and got closer to my pussy which he spanked harder. James had his hard cock in my mouth before I could moan or cry out.

I felt two fingers pushing against my asshole. I tensed up instantly, then I felt the warm mouth cover my pussy. He licked and sucked my pussy like a hungry man. His tongue drove in and out of my pussy and then in and out of my ass. I felt like I was on cloud 9. Eric, while rough was at least prepping me for a good stretch. I still didn’t know how big his cock was.

James had his fun with my mouth, but he was eager  to fuck. With a hard slap on the ass, Eric told James to fuck me my pussy for a bit, but to save the ass for him. Eric came up to my face. The clinking of his belt for some reason made me nervous. I was intimidate by this man. In an exiting way mind you. He roughly took my by my hair and pulled out his cock. His cock was bigger then any dick I had had before this moment. 9 inches of thick meat was roughly jammed into my mouth. Once he was fully erect and ready to fuck me double penetration style the nerve in me was almost lost…

Read part 2 next week! Or call me and fill that need with me. I have 2 dildo’s I can work with 🙂