My Little Mummy- I Practiced Mummification* 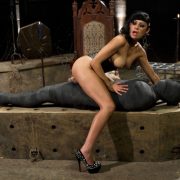 My Little Mummy- I Practiced Mummification

It’s that time of year again when guys get weird ideas and somehow I end up the one they choose to play with. I’m not complaining, I love it when guys show me something new and kinky to do. Jeff definitely threw a new one at me: mummification. I’ve seen a few clips of it when playing around on kink sites but never took much notice of it. He told me what he wanted me to do and sent me some videos to watch so I could see it in action.  kind of got into it; a guy completely helpless and at my mercy? Yeah, count me in. I went shopping, bought a ton of cling wrap which got me some weird looks from the cashier and told him to come over.

I made him get naked and stand still then grabbed the cling wrap. As soon as he heard me unpeeling it he looked at me with excitement and started breathing harder. I did a show of unraveling it to build his excitement and he loved it.  I put the loose end on his chest and began to wrap it around him. Pinning his arms to his sides. I covered him in layers, making it tight so he couldn’t move and made my way down his stomach, stopping at his waist.

I grabbed some more cling wrap and did his head next.

Starting at the top where he obediently closed his eyes for me and winding my way down to his neck. I left a small space for his nose but everything from the waist up was covered in layer after layer of wrap. Started with a new roll of wrap and began working on his thighs. I left a small patch of skin, just a rectangle where his dick was and continued down.

His dick was hard and stood straight up as I wrapped his legs together.

I could hear him moaning through the wrap and when I thought he was about to lose it I stopped. So I kept my hand around him and felt him move back and forth as best he could, doing anything to get some friction. Ha, nice try. When he had calmed down I began to jerk him off again, taking him to the brink then stopping. Pre-cum was leaking all over his head and I wondered how much of it I could get out of him. I decided to have a little contest and made it a goal to get as much pre-cum as I could.

I wanted it all over my fist until it was all wet and nasty.