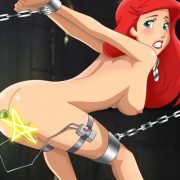 Sadism masochism undertones are certainly present in my version of The Little Mermaid: A Fairy Tale of Sadistic Torture! Time to move on to part II of last week’s perverted and kinky tale.

Ariel didn’t know what was going on. Muscular guards were leading down a dark, winding staircase. Every time her foot landed, pain coursed through her entire frame, rattling her. She winced and wondered why the prince hadn’t responded to her.

Surely the prince would recognize her as the one who’d saved him? Surely he’d fall in love with her despite the fact she couldn’t speak?

But he wouldn’t even see her now; he’d canceled their meeting for some unknown reason, and she couldn’t utter a single word to the guards. The ugly witch of the sea, Ursula, had been clear on the matter. This was the price: in order for Ariel to walk, both her tail and her tongue would be ripped out. If she failed to make the prince fall in love with her, then she would become Ursula’s plaything – whatever that meant.

Or as to quote her, she would be forced to enter a sadism masochism relationship, but Ariel hadn’t quite given the possibility of failure much thought.

Until now, that is. As the guards continued pushing her forward, Ariel grew perturbed. Females could be attractive, of course, but that witch was ugly as fuck. Not to mention that the idea of enjoying pain seemed absurd. Walking with her new legs was torture enough. And the idea the prince wouldn’t know she was his savior was heartbreaking!

She caught sight of a dark door at the end of the staircase, then paused in terror. The words “Sadism Masochism Chamber” were carved with blood on the front.

At once Ariel began squirming about in an attempt to get free. It wasn’t too long until she found herself bound against a large pillar in the middle of darkness. She hadn’t made the prince fall in love with her, true, but Ursula had cheated somehow! A meeting with the prince had never occurred. How unfair! Thinking of her painful situation made tears swell in Ariel’s eyes.

And just then, her voice came back and she let out an agonizing scream.

“Shocked?” a voice asked in the dark.

“Who is this?” Ariel cried out. “What’s going on? Why am I here? Why did the prince not recognize me?”

“Oh, poor little mermaid princess! Did you think I’d ever let you get what you want?”

With these words, Ursula came into full view, her one tooth hanging from her mouth with her parse hair and crippled hands.

Ariel was even more scared now. “The sea witch! Why are you here?”

“Why I am the prince’s favorite,” Ursula wryly replied. “I’m the one who saved him, after all.”

With a flick of her finger, Ursula suddenly turned into Vanessa, her seductive figure bound in the tight and close-cut dress from the reception. Ariel began sobbing uncontrollably, anger and grief fueling her words.

“You didn’t save him! I did!” But the sea witch only laughed louder. “Why are you doing this? Why are you causing me so much pain?”

Vanessa smiled. “Because you’ve entered my sadism masochism chamber. That’s what you agreed on, my dear.” Then she laughed before Ariel could interject. “Oh, and I now have both you and the prince.”

She stepped forward and removed Ariel’s clothes, examining her breasts and pinching both nipples as hard as she could, then began sliding her hand down Ariel’s leg.

The mermaid held her breath as she watched the hand get closer to her feet. Every step she took was the equivalent of a knife; what would the witch’s hand accomplish? Probably something far worse?

Vanessa paused. “Well? Do you want me to keep going?”

Ariel shook her head. “Of course not! And the prince would’ve known me if it weren’t for you!”

“The prince is a sissy who does everything I tell him. He didn’t even recognize you in the assembly, so why the tears?”

Ariel was conflicted. She stared at Vanessa’s smooth hand caressing her ankle and anxiously waited for her nails to dig inside the sole of her feet.

“You are now bound to my sadism masochism agreement,” the evil woman carried on, slowly digging her nails into Ariel’s pretty white foot. Ariel ripped a scream so loud that even the witch stepped back from a brief moment. Then she smiled. “You will experience pain and torture on a level that you have yet to grasp. However, if you embrace our new relationship, you will also discover just how much pleasure you can feel. Do you understand?”

She retreated her nails out of the mermaid’s foot, accompanied with other blood-curdling screams, then leaned in closer.

“Now if you’ll excuse me, the prince is waiting for me. He has a marriage announcement to make.”

Chains came out of nowhere and tied Ariel midair spreading her legs and arms. And a sadism masochism agreement? Perhaps she ought to have paid more attention when giving up her tongue and tail?

The mermaid carried on screaming, but this time it wasn’t just the feeling of shattered glass running down her legs. The witch’s words rang in her ears. “The prince has a marriage announcement to make.” Not only was Ariel bound to endure physical pain till the end of time, but psychological torture as well.

Yet, out of nowhere, the little mermaid suddenly felt a tingle of pleasure between her human legs…