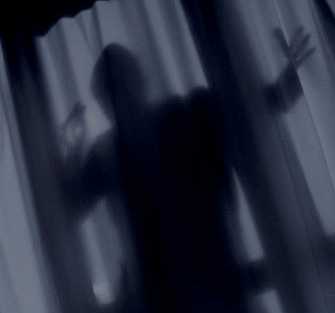 Out here in the backwoods where I live, it’s always quiet. My neighborhood isn’t very close knit, like something you would see in a city where they have block parties, and busy streets. Out here we sleep with our doors unlocked, and our windows open on cool nights. That’s why when I saw a silhouette through my living room window I knew I was being watched.

It scared me at first. I just sat very still on my chaise lounge listening to my ipod waiting to see if the shadowy figure moved. It finally did and I didn’t sleep very well that night, the thought of being watched and not knowing the intentions bothered me.

Morning came, and I forgot about it for a while. When I remembered, I walked out on the front deck and stood where I saw the figure. Nothing was out-of-place except for a print on the outside of the window. The print was low and it didn’t appear to be a hand or fingerprint. I tried to put the idea of being watched by someone out of my mind.

We started into our sexy conversation, he told me how he couldn’t wait to shove his face in my pussy. I started touching myself, it felt sooo good. I rubbed my sweet little cunt, and moaned softly in his ear. Something drew my attention to the window.

I was being watched again.

I gasped, and my hot little phone fuck buddy asked what was wrong, I told him. He told me, he couldn’t blame the guy for watching. I continued the call from my bedroom, and when I walked out into the living room, the feeling of being watched was gone again. The shadow was gone.

I thought about what my phone bone lover had said. ” He couldn’t blame him for watching”

Around 11 that night, my phone rang. I answered. ” Hi, this is Anna” I didn’t recognize his voice. His name was Sam, and he wanted to set up a call with me. His voice was dark and mysterious, and I was already getting turned on as he told me all about his naughty fantasies. I looked at the window, realizing I had forgotten to close the blinds, and I was relieved to see no shadowy figure.

The more I petted my pussy, the wetter it was getting as I listened to Sam stroke for me. I could hear his breathy hisses, and his speech rhythm told me exactly what he was doing with his hands. So I began to moan loudly, I closed my eyes picturing Sam, rubbing his hard cock against my hard clit.

“I bet you look so sexy right now, stroking your dick for me Sam,” I said as I steadily rubbed my slit with 2 fingers.

“Mmmmm, yeah? I know you’re a vision, touching your pussy for me Anna…. put your fingers inside, show me how much you like what I’m doing to you” he responded.

I began to push my fingers in, and that’s when the feeling returned, I was being watched. So I was so turned on, I was too into what I was doing to feel fear, but still, I wouldn’t open my eyes.

” Push your fingers deeper Anna, spread your legs wider, let me see how wet that pussy is” Sam whispered in my ear.

I opened my eyes.

There, at my window was the man who had been watching me.

His pants opened, and he tugged generously on his cock. Sam then commanded me to FUCK myself, harder…. faster.

Sam sounded as if he were right beside me. I began to lose it, to lose control, and I began to fall into an intense euphoric abyss. I came so hard, it made my pussy squirt.

So I stared at the figure, he had popped his load all over the bottom of my window.

And that’s when I saw it.

The light of the cell phone.

I would love to watch you!