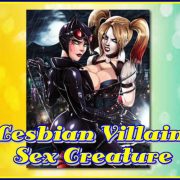 It was a dark and rainy night in Gotham City. Catwoman is perched on a high building watching the mayhem that was unfolding. She saw as Batman chased Joker’s fools around the town and as Harley Quinn broke into a sex shop. Wait Harley Quinn was breaking into a sex shop? Being a curious cat as always she decided to see what Harley was up to. If only she knew that Harley was going to give her some amazing lesbian villain sex.

Once in front of the sex shop, Catwoman looked inside. She saw Harley looking at a huge 11-inch cock. Her pussy ached at the thought of that cock stretching her tight pussy in all the right places. Catwoman tried to sneak in through an open window but there was a blow-up doll display below her and they popped and squeaked as she fell on them. Harley came bounded over and stood over her. “Whatcha doin’ there Catwoman?” She asked.

Catwoman really wanted to have lesbian villain sex with Harley.

“I could just show you what I have planned for it,” She replied. All Catwoman could do was nod her head yes. She had to have this curiosity sated. Harley straddled her and started to kiss her, running her hand from her throat to her pussy and rubbing her over her catsuit. She moaned and arched more into her tough. Grabbing Harley’s ass and digging her nails into her. Harley latched her Kinky sex cuffs on her wrist.

She felt Harley sliding the tip up and down her pussy lips before slowly sliding it into her tight pussy. That cock was fucking huge! It stretched out her tight pussy like it’s never been stretched before. Then Harley had ahold of her hips as she slid inch by inch of the cock into her pussy. “Ohhh fuck how much more is there?” Catwoman moaned. “I’m only half way in you. Think you can take all of this huge cock?” She replied.

As she fucked Catwoman she inched more and more of the cock into her. She was really getting into this lesbian villain sex. She started to pound Catwoman hard and fast, slamming the cock in and out of her pussy. Catwoman was a mess of pure pleasure under her. She could feel another orgasm building inside her and it was about to crash through her. Harley sensed it and pulled out and told her to ride the cock.