Lesbian Nurse Care: Helping My Friend With Her Duties 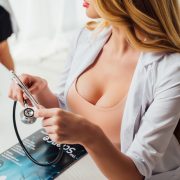 Swamped with too many patients when her friend called out, my friend Trish asked me to help her with some lesbian nurse care.

She works in a holistic medicine ward which believes in the power of sexual healing through lesbian nurse care. But lately, her fellow nurses have become far too tired from all the healing they’ve had to do, so Trish, desperate, called for me.

And, honestly, I’m always up to help those who need sexual healing. So I drove over to the clinic, and Trish gave me a very skimpy version of scrubs. She explained that she was helping the inpatients today, and I needed to sign on the waiver that I was not a doctor.

I mean, I thought that went without saying, but I signed away. Without much preamble, I began to strip, popping on the tight uniform, which was not big enough for my breasts. I had to squeeze them in, but Trish helped, nodding that it would be alright. She unbuttoned the first few buttons, showing my cleavage, and then announced I was ready to help with some lesbian nurse care.

Our first patient was very grumpy. As he lay back in his hospital bed, he claimed that this was some dumb lesbian accomplice play, and he wasn’t about to be taken over by women. Trish explained to me that he had a huge mental aversion to sex, which was causing a rise in blood pressure and anger. Patiently, Trish explained to Mr. Smith that we’d be taking care of each other in front of him, and he could touch himself without us if he needed it.

Immediately, she pinned me to the wall, her knee in between my legs. I gasped as she pulled on my hair to open my mouth. Not waiting, Trish used my open mouth to push her tongue inside, her hands staying on my hair.

Breathless, Trish took me to the bathroom to clean up. She explained quickly about our next patient, Mr. Sohn. Mr. Sohn broke both arms some weeks ago, and our job was to make sure his systems were in working order. As we entered his room, Mr. Sohn’s cock was already up and his face had a huge grin.

As it happened, Trish began to work on his facial muscles. She did this by sitting on his face, demanding he move his mouth. Meanwhile, my job was to ensure that his reproductive system was working properly. With his cock in hand, I made sure that he had adequate blood flow. And, using the tip of my tongue, I ensured that his nerves were still sensitive, and when his cock twitched and came over my face,

By now, both Trish and I were very, very wound up by this lesbian nurse care. With our pussies wet and gushy*, we moved in on our final guy. He was getting released today, and Trish asked me to help with his surprise.

“Congratulations, Mr. Jones!” Trish announced, walking in. “You are ready to leave today! Provided, of course, you can take both of us.” She then motioned for me to come in, and I did so, with a double-wide hospital bed. Mr. Jones happily stripped us both down, instructing us to kiss each other while he knelt under us. His hands found both our pussies, occasionally moving both hands to one or splitting them apart.

Finally, Mr. Jones instructed both of us to get on the double bed, with Trish on top of me. Our holes lay bare in front of him, legs spread wide. And, Trish began to kiss me, with little gasps.

Immediately, I knew what was happening. Mr. Jones was fucking Trish on top of me. But before I knew it, his cock slipped inside me and began to stretch me out. Honestly, I cannot tell you how good it felt, especially having been teased previously.

But he made Trish and I come, both twice.

*Apologies to Cardi B and Megan Thee Stallion.