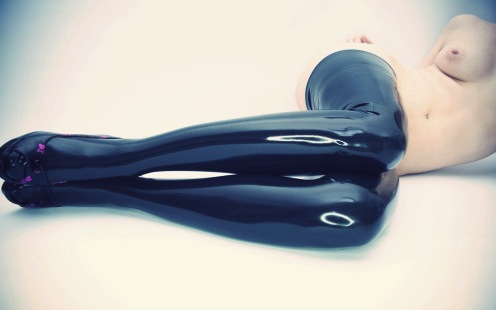 I went to the local adult store to see if they had anything new to buy and saw the best outfit ever. It was a short black latex dress with matching thigh-high boots. It would look so good on me, I could just imagine the latex stretching over my tits and ass. Obviously, I bought it.

Later that night I put them on and heard my boyfriend coming up the stairs. I wanted to surprise him so I quickly hid in the closet, leaving it open a crack. He threw his jacket down on the chair and had his back to me when I quietly snuck up behind him. I put my arms around his waist and pressed my tits against him. “I’ve got a little surprise for you,” I told him as I rubbed him through his pants. He got hard as he asked what I had in mind. I stayed quiet, letting all kinds of things run through his mind as he got hard from my touch. He pushed against my hand and I pulled away, moving in front of him so he could see me.

You should have seen his face as he looked at my tiny dress then down to my boots. He breathed heavier as he put his hands on my tits, squeezing them. He kept staring at me and licked his lips as he touched me. I felt like the sexiest woman in the world and I dropped to my knees to please my man. I undid his zipper then pulled his dick out. He was so hard and I could feel him throbbing. All I wanted was him fucking my mouth and I put my fingers around his base as I licked around his head.

I then put my lips over it and moved down, his shaft sliding in me inch by inch.

When he was done he let me go and I sat there coughing as he looked at me.