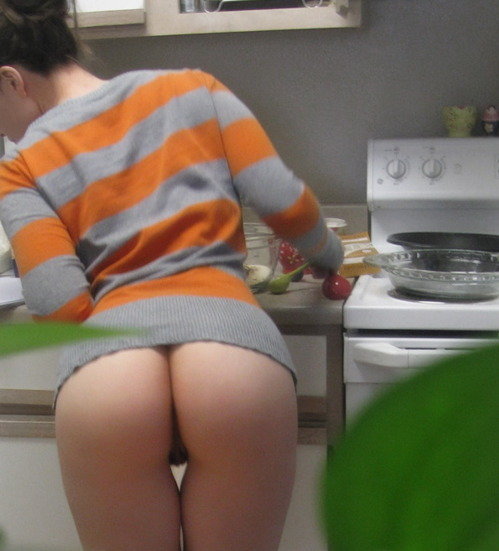 Thank God my kitchen table is sturdy, I don’t know how it holds up sometimes. I don’t have sex on it often but I definitely tested it’s a strength last night. My boyfriend and I were in the kitchen, clearing the dishes after dinner when we started to playfully make out. I hopped up on the kitchen table and crossed my legs as I told him that he could kiss me and impress me by doing the dishes by himself but I was just not in the mood tonight. He knew I was lying, I think the cheeky smile on my face gave me away.

“Really?” he asked me as he tried to pry my legs apart. “Yep, there’s no way I’m sleeping with you tonight. I have a headache, I’ve got to get up early tomorrow and I’ve got my period.” I gave him every excuse in the book. He called me a liar and pulled me off the table so I was standing in front of him.

He reached for my zipper and I tried to stop him. Then he put my arm behind my back and kept it there while he used his other hand to undo my jeans. I tried to wriggle away but I was just too weak to get away from him. He yanked my jeans off and pushed his finger into the wet spot on my panties. His fingers slid between my lips and the fabric roughly moved against them. I liked the feeling and I got wetter. So I moved my hips forward, wanting to be touched some more, and he took my panties off.

I decided to be helpful and took the rest of my clothes off then helped him get undressed.

He said that it looked like I had changed my mind and I told him to hurry up. He said he’d take his time and that he wasn’t going to rush just for me.

I sat on the edge of the table and closed my legs again as I told him that his attitude was turning me off. He pulled my legs apart, easily this time because I was pretty much done playing hard to get by now, and he put each leg over his shoulders. I leaned back as he did this so I wouldn’t lose my balance. He put his hands on my thighs and began to push into me. I liked this angle, it was different but felt nice. When he was done he told me to lift up a bit and put my arms around his neck.

I did what he wanted and I felt him go even deeper. I asked where he’d learn this and he mentioned seeing it on some website. He moved his hands down to my ass and held me as he began to thrust. He started slowly to see if I was good with it then began to go faster. My abs burned a bit from the effort of keeping myself upright and keeping my legs on his shoulders but I couldn’t complain. His dick went deep inside with every thrust and my pussy throbbed from it.

My pussy juices were sliding down my crack and pooling under my ass.