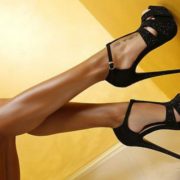 Kinky shoe fetish – did these three words grab your (kinky) attention? I actually didn’t know I had one of those until last week… Maybe, I suppose, I should’ve guessed it wouldn’t be so far fetched considering the foot fetish I discovered I had a while back. Or perhaps it was only a matter of time considering my extensive collection of fuck-me heels? Pumps, leather, wedges, stripper heels, knee high boots… You name it, and it’s in my closet!

Anyways, I didn’t completely become aware of my kinky shoe fetish until I met someone who had one.

And boy did he have one! I was at a casual bar, relaxing with a beer wearing little daisy dukes, a white crop top and, of course, four-inch heels to sex up my outfit a bit. (I personally hate wearing shorts, skirts and dresses with flats, unless I’m doing something sporty of course!) Next to me, a man seemed to be somewhat occupied with texting, but I could tell by his body language that his attention was shifting towards me. So I finally turned around completely and looked at him straight in the face.

He gazed at me, barely even blinking. The man was a total stranger, but that didn’t stop him from staring, like he had every right to do so. He didn’t care if it was inappropriate – although I liked that about him. Confidence is huge turn-on for me! Although I don’t usually go for the artist type, this man’s tattoos, goatee, and ripped jeans somehow made me squeeze my crossed legs together. After all, I’ve always been a big nympho, regardless of the type man or woman.

After all, variety is the spice of life, right?

The man’s eyes told me he wanted me, so I knew it was only a matter of time before he acted. I could play hard to get though. Or I could just punish him for taking so long to approach me. I couldn’t help but notice, however that neither my bare thighs, nor my tits popping out of my shirt held any interest for him. His gaze were going right down to my feet.

He leaned in and without even asking for my permission, grazed my heel with one single finger. That single motion did something I’d never experienced before. So little produced so much! My panties dampened immediately. I quickly realized he had a kinky shoe fetish.

More specifically, my feet were enclosed in platform-heeled patent pumps, with thin leather straps wrapped around my ankles.

You see, slender legs in four-inch heels are just what a man needs to unleash his kinky shoe fetish.

The man glanced around the bar, but I could tell he didn’t give a flying fuck about who saw us. His kinky shoe fetish took precedence over any sort of propriety he may have had.

“Nice heels,” he said, his eyes gleaming with lust.

I coyly smiled, pretending he didn’t have as much as an effect on me as he did. “Thank you.”

I slowly uncrossed my legs and planted my heels on the floor. That was enough to truly provoke his kinky shoe fetish. He gulped hard, his eyes riveted on my shoes.

He glided his fingertips along my shoe again. He took his time, causing goosebumps to erupt all over me. His hands on my heels’ leather felt like heaven.

” Every man wants a woman like you,” he said. “High-heeled beauties with slender legs.”

I arched an eyebrow. “Are you one of those men?”

Even before the question left my lips, I already knew the answer. The answer was right there in his pants. It was shaped as a rock-hard bulge between his legs.

He raised my foot to his lips and kissed the glossy leather of my shoe. He breathed deeply, filling his lungs with my scent. When he exhaled, hot breath tickled my skin, and when he looked up, I could tell he was about to erupt in his pants. And I could say the same thing about me in my little daisy dukes.

Got a kinky shoe fetish that needs ultimate release? Call me at 1-888-413-5974 for fetish phone sex and let me take care of that for you!