Kinky Sex Stories I Played Bad Cop And Got Eaten Out* 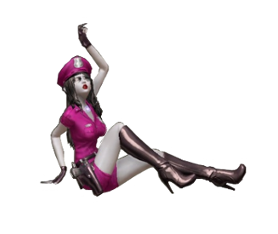 Logan is a bad boy who loves Kinky Sex Stories and can’t keep out of trouble. He begged me to be the naughty cop who finally puts him in his place and punish him.
I bought a sexy cop uniform online that was skin tight and showed off my curves but it took ages to come. It was worth it though because I’m going to be wearing it a lot for Kinky Sex Stories.
I put it on with a pair of black heeled boots then put a couple of goodies in my handbag. Driving to his house I parked across from it. I waited in the dark and when I saw him get home from work I quickly drove in behind him, flashing my lights.
Grabbing my goodies out of my handbag I got out of the car, slipped my fake gun into my hip holster and went to the driver’s side window. I turned on my flashlight, pointing it through the window as he rolled it down.

His eyes ran up and down my uniform and I told him to step out of the car now.

He did as he was told and I said that I noticed the way he’d been looking at me, didn’t he know that it was sexual harassment to be staring at a cop like that? It was so hard keeping a straight face, I was having so much fun and I was about to have some hot sex.
He got out and I grabbed his arm, turning him around and slamming him against the car. I put his arms behind his back and took the handcuffs out of my back pocket, snapping them around his wrists. “You have the right to remain silent. Anything you say can and will be used against you.” I said and hip-checked him on the car for emphasis.
Guiding him to the house I dug around his pants pockets for the key, taking my time and copping a feel while my hand was down there.

I opened the door and shoved him inside, pushing him down on his knees in the hallway.

He looked up at me and I started sliding my short skirt up to my hips. “If you’re good I’ll let you off with a warning,” I said then told him to take my panties off with his teeth.
He shuffled forward and stretched his head up, his teeth grazing me as he gripped my panties in them. The handcuffs clinked as he tugged them down and I stepped out of them. I grabbed his hair and forced his head back as I stood over his face. “You’re going to make me cum in the next ten minutes. Understand?” I asked and he nodded.

I took my fake gun and held it to the side of his head. “You better do a good job,” I said then shoved his face into my pussy.

Grinding it on him I then stopped so he could get to work. He licked my lips, making me shiver as I got wet then slipped the tip of his tongue inside.
It flicked up, going in deep and teasing me as juices slowly slid into his mouth and I moaned. He gradually licked me faster, making my nipples and clit ache as his tongue rubbed against my walls. I pushed down, smothering him as he started licking and sucking on my clit.
My pussy tightened and juices gushed out of me as my legs shook. “Keep going.” Gasping he rubbed his tongue over my clit. I came hard, making his face a wet, slippery mess.
When I was done I put my toy gun away and pulled him to his feet. Taking the handcuffs off I told him he was free to go then left. I hope he fucks up again soon so I can put him in his place.