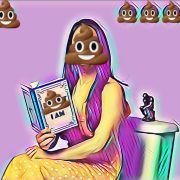 Some love kinky scat calls because they wish to torment you and push your buttons.  It is a controlling factor that they feed off of.  Just hovering that chocolate pudding around your mouth.  Never quite making you eat it.  Just smushing it around and layering it on you like clay to see if you will resist or get all squeamish.  Inhale my toxicity.  Feel the heat of my excretions.  Know that you are saturated with my dung.  Let it dry on your skin and feel renewed.

For some, it is symbolic and has a ceremonial, almost horticultural, and spiritual undertone.  To smell it, taste it, or even see it draws them in like a siren song.  Coprophilia is another term for scat.  One might say that watching a person defecate is so taboo your gonadal steroids go berserk.  Not to forget how this plays into your ego and gives you an adrenaline rush.

Kinky scat calls are okay, as long as they do not violate your state’s obscenity laws.  Be mindful of how and what your region defines as obscene and harassment.  For the most part, it is all about how you do it.  So please be polite about sending your tokens of affection in the mail.  Don’t just drop it in a paper bag and set it on fire on someone’s stoop.  Use a food saver bag and vacuum seal that load.  Double bag it if you must, and know for sure that the recipient is just as into the adrenaline rush of scat play as you are.  Just because it makes your daisy sweat doesn’t mean it didn’t make their wilt and dry up.  Make sure your thrills are carried out in a consensual and non-coercive manner.

Back in the day, my brother would burp his ABC’s and make fart sounds with his armpits.  In turn, I would let out silent killers, simulate the sound of passing a fluffer-doodle and make mud sculptures of him with a sign that read: “To the Biggest Pile of Turds I know.” It was all fun and games until puberty passed and we were still tooting and pooting for fun.  Taco Night was my favorite night to get him good.

Let her rip, Captain Shit Face! My barking spider is fierce!  I’m lactose intolerant and love cheese.  Pizza Night was phenomenal!  The first time I caught my brother sniffing my panties was after I ate a calzone and an entire medium cheese pizza by myself.  Not to forget that I love Nesquik in strawberry (giggles).

Adjusting my diet for rainy days that I knew I’d be trapped in the house with my brother was such a thrill.  He didn’t seem to be grossed out by it, but more so intrigued.  We would play the dozens better known today as roasting.

Walking past the couch on the way to the porcelain John, I dropped an air biscuit in his sleeping mouth.  Not even for a second did he frown up.  Instead, my brother Marco just tasted the air and smiled.  Rolling over a bit to adjust his body so that he could place his hand in his boxers, I just stood there and fired off once more.

It was too late, I had started to let it out and could not keep it in.

I yelled and ran to the bathroom leaving droppings along the way.  Now he is awake taunting me while he strokes his cock.  Marco retrieves the dustpan and some gloves from under the sink.  Scoops it up as if I were a dog that had an accident.  Uses all sorts of pet supplies, then brings me my waste.

With a crooked smile, Marco asked me if I was ready to taste this muffin I breadcrumbed to the lavatory?”  I shook my head no.  My tummy was gipping and my pipes were leaky.  Marco pushes a stool up to me so that he could see my stool.  Placing my feet on it and back into my chest, he rubs my clit intensely and enjoys the show.