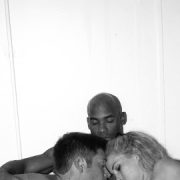 I know it’s a little early to be thinking about Valentine’s Day but I’ve been wanting to book a kinky couple’s massage for my boyfriend & I.

He’s always expressed wanting to have a spa day but you know me, I can’t just have a regular vanilla evening at one of the hotels here. Bae sometimes in the heat of passion has said things that were…bi-curious. Why shouldn’t I indulge my man with a kinky couple’s massage?

After poking around on the internet I finally found this super hot African King named Jared. He was 6’4, pure muscle, and covered in sexy tattoos. Exactly the kind of guy I have found on my bf’s Twitter feed. I have also noticed his internet history contains searches like “black phone sex“.

My boyfriend has no idea I am onto his racial-play-driven bi-sexuality.

He got home from work, I gave him a kiss as soon as he got in the door and surprised him with a card. We opened it together and it was a print out of the voucher for our kinky couple’s massage that was to start in exactly one hour.

We rushed upstairs to take a steamy shower together. He has absolutely no idea that things are going to get very X-rated shortly. Together we dry off and he reaches for a set of grey sweat pants. I shake my finger “no” seductively and instruct him to stay in his towel to answer the door.

Boo is totally aware of what an African Cock Slut I used to be.

I can tell sometimes he feels bad about himself- totally aware that his white penis just isn’t the same compared to a BBC. In the past, we have dirty talked a bunch about his inability to really get the job done comparatively. I really hope this kinky couple’s massage becomes our new naughty outlet for swinging-fun.

He answers the door and his eyes get huge when he sees Jared’s massive dark chocolate body.

All that talk about me one day being a cheating wife probably flooded into his mind. I could tell he was ultra turned on already and quickly catching on to my little plan.

“No massages tables, huh?”, he asked Jared. Our kinky couple’s massage therapist grinned sinisterly at him, a single gold tooth gleamed back answering the question silently.

I walked up and began immediately rubbing on Jared’s cock through his pants while reaching out for my boyfriend to join us. We both dropped down to our knees and began sucking his big fat black dick. It was 10″ long and so thick I couldn’t get my fingers all the way around it.

Jerad sat down on the sofa and I climbed on top of him, my bf helping me slide that fat schlong into my tight white & pink hairless slit. My boyfriend stuck his cock inside my ass and they fucked me together while I verbally affirmed what he already knew – we now belonged to this African King and he was giving me away.