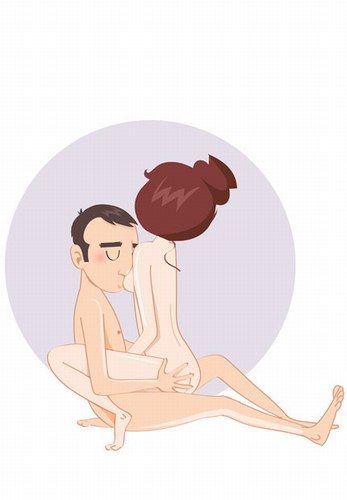 If you missed part one of Kama Sutra check it out here. I loved the first position we did from the Kama Sutra and think it’s one we’ll be doing often. Damn, my clit got one hell of a workout with that one. A couple of days later we looked went through the other positions and decided to try The Basket. This was another one that I liked because it was about my pleasure. Yeah, I know it’s supposed to be about us enjoying sex as a couple but after trying The Bandoleer and having my clit pounded I was more interested in what positions could make my eyes roll in the back of my head.

My boyfriend sat on the floor and stretched one leg out in front of him while bending his other leg at the knee. He was already rock hard and leaking pre-cum. I straddled his lap and lowered myself down, feeling him slowly enter me. When he was inside I put my hands on his shoulders and he put his hands on my waist, pulling me closer to him. Being that close to him made him go a bit deeper and put my breasts right in front of his face. I sat on his lap and he held a breast in my hand. He ran his fingers over it and pinched my nipple between two of his fingers.

It hardened as he gently kneaded it.

I moaned as a shiver ran through me and my pussy got a bit wetter. He bent his head down and swirled his tongue over my breast and across my nipple. It felt good and I put a hand on the back of his head, encouraging him to keep going. He stuck my nipple in his mouth and began to suck on it. His mouth felt hot and wet as he moved his lips and tongue over me. I could feel him throbbing in my pussy and I began to slowly rock back and forth on him. I loved the sensations of his mouth and his dick and I moved a bit faster.
Then I felt him moan on my breast and then bite down as I pushed my hips down harder on him. I let out a little gasp of pain as his teeth grazed over my sensitive nipple. That just turned me on more. He sucked on my breast harder then popped my nipple out and moved his mouth over to my other breast. He began to lick and suck on it while using his hand to rub my other breast. His tongue, his lips, his fingers, his dick. I went into sensory overload. Then I let go of his head and braced both of my hands on his shoulders so I could ride him harder.

I went hard and fast, impaling myself on his dick as he groaned and stopped trying to play with my breasts.