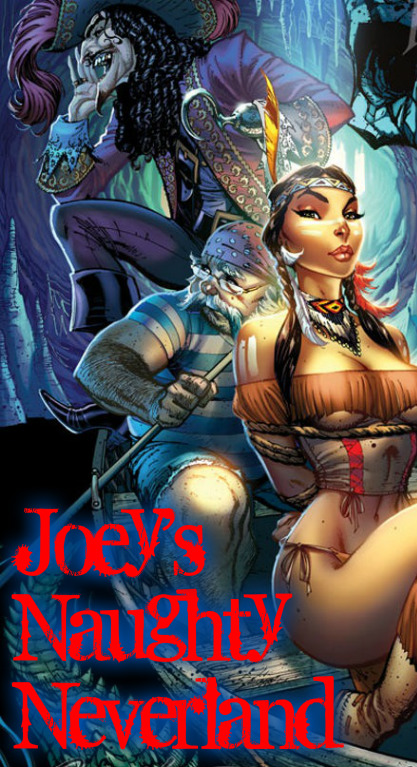 So…naughty is as naughty does, right? And sharing is indeed caring. So, Lily decided early on to be the naughtiest little bitch on the planet! And she got a great start with her nasty-ass Daddy! Those pirates thought they left her for dead…Joke would be on them. When Peter flew in to save the day, she was so grateful, she dropped to her knees and thanked him properly, with a sloppy wet blow job and swallowing.  Of course she had no idea he already had a girlfriend! So, being friends going forward with Wendy would be in impossibility. She couldn’t blame her. Seeing your man with a sexy Native slobbing his knob, spittle dripping from her chin, would be the kiss of death for friendships. LOL

Lily hadn’t actually fixated on Peter…she knew damned well, where there was one dick,, there were many! Peter ad a reluctant Wendy flew her to Neverland and there she found her own personal Mecca of testosterone. The LOST BOYS! Yum! Lily wasted no time bedding them one after another and often in groups. She loved fucking in the forest, the kitchen, the bathrooms, the living room…she had no desire to be bedded in real beds! Her this was public nudity and sex…preferably, in a group setting.

By the time those shithead pirates landed on the Neverland shores, Lily had every man there bent to her will. They took the pirates captive and turned Lily lose on them.  Now, here the story gets a little washy…some say they died of dehydration, others tell tale that she fuck each and every man…to death! Impossible? One never knows…Oh, well. of course. I do…

That little hot bitch left all of her diaries to my family and I can decipher every word. Call me for the breakdown.  Giggle