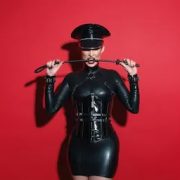 Inmate Snuffed Out:  You heard the rhythmic click-clack of my high heels coming down the hall.

How did the inmate snuffed out unfold? Well- a steady beat was a stark reminder of your surroundings. You dressed in a white and black jumpsuit. Your identification number boldly printed on the left breast- No. 43281. The day had finally come- your execution day.

You knew I was a savage Headsman.

Unsure of what to expect, given that any other inmate who had walked down that hallway with me never exactly returned. There had been whispers of a twisted tease and denial torture but you chopped that up to being complete bullshit. It didn’t even make sense.

The sharp sounds of my shoes made you curious. You couldn’t recall any uniformed man’s boots creating such a sharp and specific noise but placing why it seemed so familiar escaped you. Suddenly it stopped, as quickly as it had started. The peephole slid open. You heard my voice, almost sing-songy, address you by your inmate number. Soon to be an inmate snuffed out.

You obliged- quick to follow the orders given, especially as your curiosity was peaked when realizing your executioner was a young woman. This surprise was not at all lost on you and suddenly the music of my walk made much more sense. Stepping up to the red line within your cell, you held your wrists out. The large heavy door rolled open and there I stood. Your jaw visibly dropped.

“A peculiar uniform, strangely attractive, a beautiful blonde, cold eyes” – Your mind listed the first few things you noticed about me quickly, analyzing the situation and your visitor.

There I stood. Thin and strong with long blonde hair slicked back into a high braid. Wrist length leather gloves, thigh-high leather boots. A tight pencil skirt and extremely fitted & tailored uniformed shirt. Sexy being the very immediate next. The crisp red lipstick I wore looked as if it never moved. Cat-eye glasses that made me look even more of an authority, slightly reminding you of a hot teacher you had once before in grade school. You knew immediately you would do anything I said.

I placed the cuffs around your wrists and ball & chain on your ankles.

The 6″ heel of my boots playing the music again. You became hypnotized by the sway in my walk. We approached the heavy iron door labelled Execution Chamber. The anxiety became very real again that your time was actually almost up. You’re about to be my inmate snuffed out.

“Strip, inmate!”, I ordered and you obeyed.

I unlocked the chains and cuffs. You unzipped your jumpsuit and sliding socks and boxers off. Finding this somewhat odd but knowing best not to question the one who carries the ax. I pointed to a large wooden chair, you noted the lack of anything resembling an electric current. Your dick tingles. Does the fantasy of being an inmate snuffed out turn you on?

“Open your mouth, inmate.” You did and I placed a small red pill on to your tongue, then ordering you to swallow. “The medication that was just administered has a very special purpose. After I read your crimes aloud you will be subjected to a series of tests performed on your genitalia. You will have an overwhelming urge to release. The moment you do is the very moment you die. I recommend holding out for as long as you are able. That being said, I fully intend to use the most twisted tease and denial tactics possible to ensure this is extra fun. If you can last exactly 1 hour without cumming from this twisted tease and denial torture your life will be spared.

“Do you understand the rules the rules of my twisted tease and denial game, inmate?”

You nod and it begins. You are chained to the chair when a light comes on. Looking out, you see an entire crowd of women staring back at you emotionless. It becomes clear that inmate snuffed out is a game to me and that I am pleased to watch you squirm around, begging me to stop. My inmate gets snuffed out every time & that’s what you get for raping teen holes!

What finally did you in? Call me and find out how exactly the inmate snuffed out ends. I tell the best snuff phone sex stories.