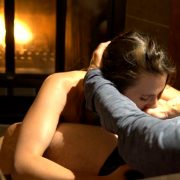 Incest Is Best As The Saying Goes!

Have you ever fantasised about fucking a hot family member? Yes, it’s taboo, but isn’t that why we love it so much? They do say incest is best, don’t they? Well, let me tell you about a recent conversation I had about this very subject!

So, I have a really good friend called Sara. We know everything about each other. Or, at least, I thought I did.

During our FaceTime call, she was pretty tipsy – it seems to always be Wine O’Clock in England. Late afternoon here, I had just poured myself a G&T. Sara and I began gabbing away like we always did but she was certainly slurring her words.

We discussed being stuck at home and the fact that it hadn’t exactly been a summer of fun! All of a sudden, Sara started giggling and giving me a knowing wink. I always knew when she had something to tell me and this was blatantly obvious. However, try as I might, she just wasn’t giving anything up.

As the call continued, she poured another glass of wine and we talked about our families. When I asked how her brother, Tim, was, she let out another giggle and started talking a little gibberish. I could barely understand anything she was saying as she gulped more Pino. But one thing I did understand, was “cock”.

Finding it extremely odd that she was talking about cock and her brother in the same sentence, I pushed further. I was intrigued and excited about where the conversation was going…

And Then She Confessed…

Her brother and his family had decided to visit and as it was a fair drive, they stayed the night. While the kids all played together, the adults spent the evening catching up.

Before long it was pretty late and Sara and Tim found themselves alone, reminiscing and playing music from their teens. As Sara poured another glass of wine, she looked at Tim and he gave her that sly smile he always used to.

Her head was telling her, no, but the alcohol took over and she dropped to her knees and started to undo Tim’s jeans. Despite his feeble protests she soon had his dick in her hands.

“Spit on it” he urged, and she did as she was told. Just like when they were in his teenage bedroom. So many memories came flooding back and Sara sucked on her brother’s big hard cock just like she used to. After all, incest is best!

Keep It In The Family

They never fucked but he would rub his dick over her tight teen pussy and arsehole.

As Sara continued, I was getting increasingly turned on but had to be careful that she couldn’t see my hand as it rubbed my pussy. I had to agree incest is best!

Fast forward to that sexy night at Sara’s house. She took off her top and Tim’s face lit up as he saw her full bouncy breasts for the first time in nearly twenty years. He pulled her to him and started sucking on his sister’s nipples as Sara threw her head back in delight.

She knew she had to do it – she pushed his head down towards her moist pussy.

As Tim devoured his sister’s sweet slit, Sara sucked his cock and balls with zest. He flipped her over on all fours and let his tongue taste her arsehole for the first time. He had fantasised about doing that since he had watched through a gap in the door as their father dipped his tongue in their mother’s arse.

Tim laid on his back and Sara climbed on top of her brother’s rock hard cock. As she slid her pussy over it they knew what they were doing was wrong. But in whose eyes? Nobody was watching and nobody needed to know. Their little sexy sibling secret – brother sister fun!

Exhausted, they retired to bed and the next morning it was breakfast as usual. Only Sara and Tim weren’t hungry. They had got up early and shared breakfast in the garden.  And you know as well as I do, that’s not all they shared…

Incest Really Is The Best!

After all, incest is best.