Ice Cube Teasing: Edging, Toys, and Jerking Him Off 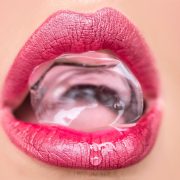 Ice cube teasing is my favorite way to tease and edge my boy-toy. Teasing has always been my favorite game to play. No matter who I’m with. If I’m flirting with a stranger, or trying to fuck someone I’ve already fucked a thousand times.. Getting them on edge, teasing them until they’re seconds from falling apart, from having to take what they want, is the thing I love most about sex. I love finding new ways to amp that up.. and sometimes, that includes some unexpected sex toys. A little ice cube teasing was a fun new experiment to try.

I always steered away from them. I didn’t know how something so cold and numbing could feel good or turn someone on. That is until I tried it with my fuck buddy, and he loved every second of it. I didn’t know how to bring it up, honestly. I’d done everything else with him just fine, even having him wearing panties. I could tease him, flirt with him, fuck his brains out. But I didn’t know how to talk him into letting me use ice cubes on him. It took a little convincing, for sure. If it’d been me, I would have needed a nice long “why this will feel good” speech before I let something that cold come anywhere near my clit.

For some reason, he’d heard about it before, and was all for it when I asked if I could try it with him. I know he’d done some fetish phone sex before, so who knows what else he tried! So, I eagerly got a bowl full of ice. I made sure to dull some of the edges on the ice cubes with my fingers, just warming them up so there were no ridges or rough spots. The point was to tease and be sensual.. not accidentally hurt him.. not tonight, at least. 😉 So with a bowl of ice cubes in hand, I took up the next step: blindfolding him. I tied his hands down to the bed, covering his eyes with a black bandanna I had laying around. Once he was all tied up and secure, I let him wait for a while.

I touched, kissed, and licked my way down his chest and started rubbing right up against his cock. It felt so good, but I wasn’t going to let him have it just yet. I waited until his cock was rock hard for me, standing at attention with every kiss and lick I delivered. And then I reached over, grabbing one of the ice cubes as quietly as I could – so he wouldn’t know what was coming. I slid it down his chest slowly, smirking a little as he twitched under me, doing a tiny jump from how cold it was. I slid it down his chest..around his pelvis..and slowly up from his balls, to the head of his cock.

He didn’t know how to feel.

He loved it, but he didn’t know how to react. His cock stood up front and center for me – so I figured he was somewhat enjoying the new sensation. I kept going. This time, I got more heavily involved.. kissing, licking, and stroking his cock as I was running the ice cube gently over him, sometimes letting it slide down over his balls and rub up a little against his asshole. When the ice cube melted, I’d get another. One by one until I finally thought I’d worked him into it enough, and gently slid one into his ass. He tightened up a little, but he let out a small moan.. and that’s when I knew I had him. The naughty boy was enjoying it! Maybe he was just as kinky as I thought.