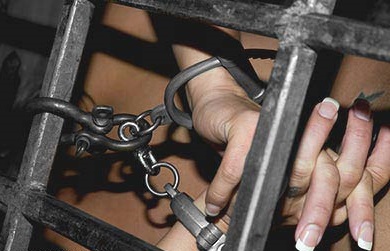 I’ve always been kind of a “party girl.” I just can’t resist, you know? Especially if it’s a themed party – and especially if if that theme is humiliation.

Last night I went to one of the best humiliation parties I’ve ever attended. My invite came from one of my closest (and oldest) domme friends, so I knew this shit was about to be good. I just didn’t know it was about to be that good!

There were a lot of shameful spectacles of every shape and size (or lack thereof) going on throughout the night, but probably my favorite event was a special game of “see-saw.” Our see-saw was the wrinkled, ugly dick of a middle-aged, pudgy sub named “Slave Billy.” Well, if you could call it a dick. We actually referred to it as “stub” or “the stub” for the duration of the evening, so of course it had to start with inflating that baby clit with a penis pump!

My friend threw a rope over the rafters of the dungeon, the end of which was tied to Slave Billy’s inflated (probably throbbing, of course) stub. The game didn’t really have a rules persay, it was pretty much just all of us beautiful Mistresses taking turns pulling the other end of the rope while shouting “see-saw” in our evillest sing-song voices, while cackling in between our increasingly vicious tugs.

Somehow we decided that “winning” meant who had made Slave Billy cry/scream the hardest during that round of taking turns on him. And what better prize for the winner of our sadistic fun than to select one of the candles burning nearby to use on that shriveled (and now completely raw) little stubby, right?

When my first winning round candle-selection came around, I knew which candle I would pick immediately . . . the red one, of course. Red candles, for those of you closeted submissives or slave-curious readers out there who don’t know, burn the hottest. If I got to drip wax on Slave Billy, I was going to make it hurt. I was going to make it really hurt.

NO LIMITS / NO RESTRICTIONS / NO TABOOS