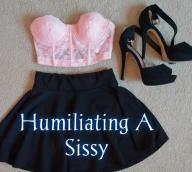 Sissy boys are so much fun!

I don’t play with sissies very often; most of the time I like my men to be manly, take charge type. However, it is fun to dress a boy up as a Sissy now and again.
It reminds me of when I was little and used to dress up my dolls with the added fun of watching him get all worked up. I go to “fun” clubs and house parties now and again. You know the type, the ones where vanilla people never dare go to.
One person I run into a lot at these places is a Sissy who likes to be called Brianna. I know she’s into humiliation and thought I could have a fun afternoon with her so I gave her a call one day. I asked if she wanted to come over and play. She did and I tried to come up with a nice humiliating task for her to do. By the time she arrived, I had come up with something pretty good.  This was going to be a great First Time Sex Story.

Brianna arrived as Brian and he had a bag full of items.

I took him up to my room and he got undressed while I went through the things he had brought. There was a denim skirt, a pink top, a pair of black wedges, a shoulder length brunette wig and a make up bag.
I picked up the clothes and turned to hand them to him. He had stripped down and was only wearing a pair of red lace panties and a matching bra. I gave him the clothes and he put them on. I sat him down on the bed and put the wig on him before grabbing the make up bag. Then I opened it and saw he had a surprisingly good taste in colors. I took out a deep pink lipstick and applied it before grabbing some mascara and eye shadow. When I was done I took a step back and admired my work. I think I did a pretty good job considering what I had to work with. He was now Brianna.
She stood up and put her shoes on. She towered over me and there was no way she could pass but I thought she looked great.

I asked her if she was ready for some humiliation and a rush of excitement flashed across her eyes.

I told her she was going to go shopping and had to buy exactly what was on the list. She followed me to care like a well-trained puppy.
I got out of the car and handed Brianna her shopping list. It had four items on it: a large cucumber, a bottle of lube, a roll of duct tape and a teddy bear. She looked at me but I just told her to get a move on.

I followed a short distance behind her as she walked down the aisles.

I noticed other customers looking at her. A few of them whispered to their shopping partners and one even took a pic with their cell phone. As if seeing a 6-foot man in a skirt and wedges was unusual in this part of town. I did like knowing that she was getting this attention because of me though.
Finally, Brianna had found the items she needed to get and put her items on the counter. The male cashier did a double take when he looked up. He smiled awkwardly and started scanning the items in. I wonder what he thought Brianna was using the items were for. I’m sure no clean, family friendly ideas crossed his mind.
I left the store and went back to my car. Brianna came out and her face was bright red as she walked to the car with her head down. She got in the car and put her bag on her lap. She said that that was the most embarrassing thing she’d ever done but she said it with a smile. I told her if she thought that was embarrassing then she’s going to love it when I make her buy tampons and condoms like a good little sissy.