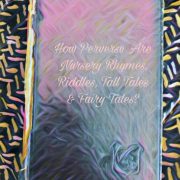 Don’t let the smooth taste fool you.  I’m Humpty Dumpty, and I’m not as fragile as an egg.  Like Humpty Dumpty, I’m both Brandy and Ale.  Humpty Dumpty is also referenced as a loose cannon!  I can be that too.  I prefer the Samuel Arnold version from Juvenile Amusements over the Oxford Dictionary of Nursery Rhymes. Who needs all of the king’s horse and all of the king’s men when you don’t know how many he has?  I’d love to just sit on a wall, perched up looking cute and “four score men, and fourscore more” come to my rescue and beckon my call.  Fourscore is four times twenty.  You do the math!

The Old Lady in the Shoe is a heaux!  How perverse are we to water down a heaux’s story and tell it to children?  How in the world would you have that many children and no husband? She must have been a serious nymphomaniac, and my friend Jin is just like her but on her 5th husband. Yeah, Jin is a Black Widow.  Her husbands normally die around the second baby, leaving her with all that insurance money.  I

I’m just happy she never married the old man from outside that was snoring.  After all, he was a bum that bumped his head and died. “Ain’t no sunshine when she’s gone”, that’s why it is good that he left first.  Now she can play “eeny, meeny, miny, moe!  Catch a nigga/rabbit/pig by his toe!  If he hollers let him go.  Eeny, meeny, miny, moe!”

My version of nursery rhymes is a bit more befitting.  “Eeny, meeny, miny, moe!  Catch a pimp by his heaux.  If she hollers, pay her mo!  Eeny, meeny, miny, moe!”  I’m such a perv!  Sing with me: “Ring around the gigolo, with a pocket full of dinero.  Pump it, pump it.  WE ALL BUST A NUT!”

Recall the fable of Aesops about The Man and the Wood!  Already that sounds perverted. The man takes his ax into the forest and asks the trees for a branch.  They give him one, and he chops them all down.  Why would you ask a heaux which is the best heaux?  You gone just have to test them all out and decide for yourself.  Them heaux’s knew his axe was “fully formed.”

How Perverse Are We Now?

We don’t get too much darker than Briar Rose and her daughter Snow White.  Briar Rose is cursed by an evil fairy and becomes Sleeping Beauty.  Sleeping Beauty had an enchanted voice like a succubus or a mermaid.  The dark fairy was ticked off and decided to put Briar Rose in a coma to be awakened by “true loves kiss.”

Briar Rose and her prince begot Snow White, and a curse befalls upon the land by a wicked witch and Sleeping Beauty dies leaving her husband that is now the king a widow of a newborn baby.  Maleficent is the “Clean Up Woman” and the witch with the curse in attempt to be the “fairest in the land” because her vanity makes her the ultimate dom!  You’ve seen her outfits!  The sexiest villain of them all!

A queen must demand respect, yet the princess is so seductive, she has 7 Dwarfs and all the animals in the forest at her becking call.  Who do you know other than a good heaux that has an entire family of brothers worshipping her and not fighting over her? Call me Maleficent or the Dark Fairy because I’d beat the heaux into a coma too!  How perverse am I?  So much so that I’d take note from Snow White and play the harlot!

Which Peter, wants to play with me today?

Could it be Peter Cottontail, St. Peter, or Peter Rabbit?  For the record, I’m not playing with St. Peter, I need access to be granted through the Pearly Gates.  I’d like to dress Peter Cottontail, but he is too willing to please.  Peter, are you more like Peter Piper that likes to shop for pickled peppers before you lay that pipe?  Are you more like Peter Rabbit, and when my clit lands on your nose, you will flip it and flop it, but never let it go?  Oh no!  I think you’re a pumpkin eater!  Am I the wife that you couldn’t keep, so you put me in a shell and kept me very well?