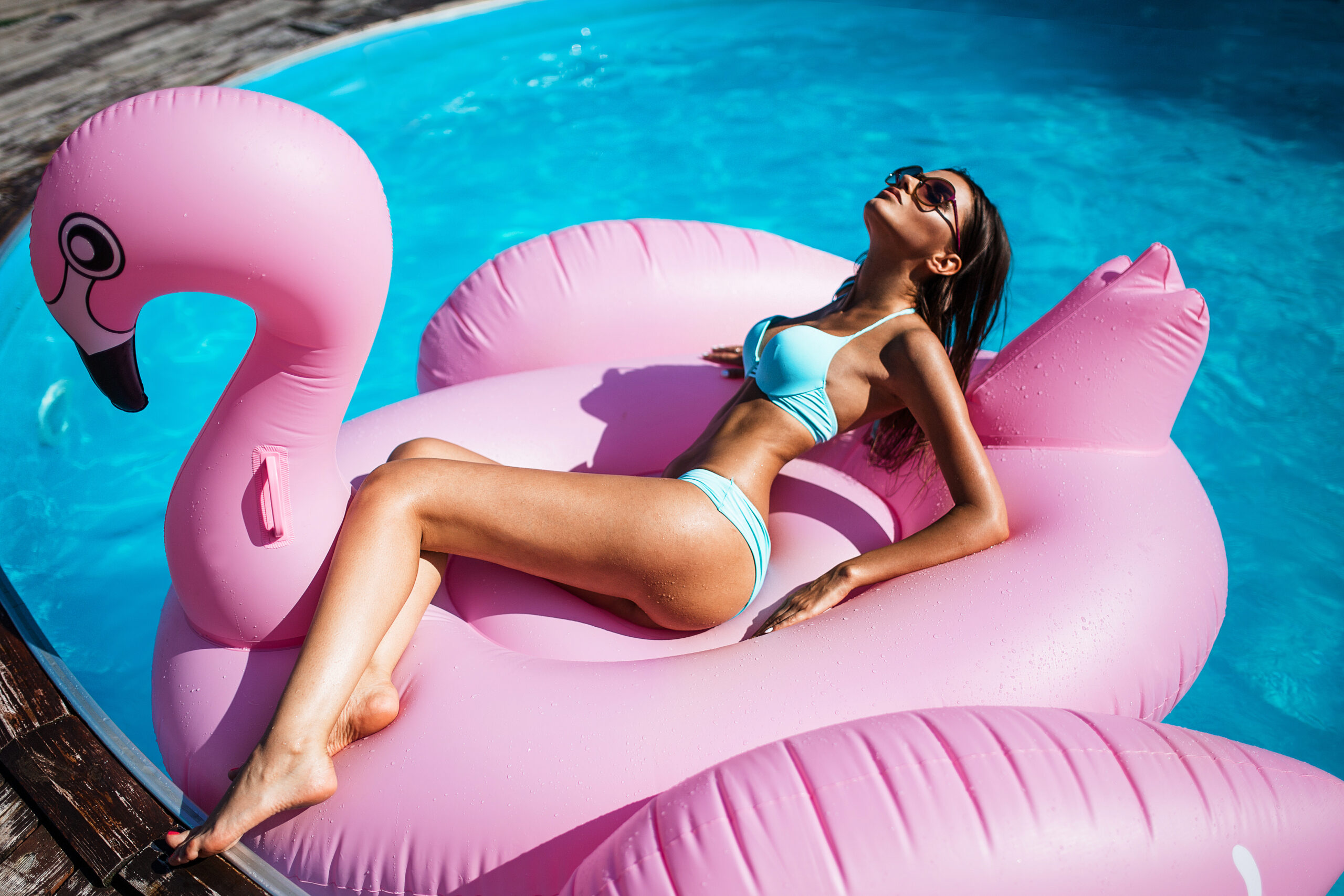 I really wanted to get in, but I didn’t have anything to change into.  My boyfriend didn’t want to get in but told me that if I wanted to. It was fine but to see if anyone had something else for me to wear.  My friend gave me a small pair of boxers and a t-shirt (white, go figure).  I didn’t want to upset my boyfriend so I put it on and got into the hot tub.

My boyfriend came out with me but sat on a bench outside of the hot tub.

There weren’t many people that wanted to get in; most of them stayed inside the house drinking.  When I got in there were already three guys and one girl.  I sat down near the side that my boyfriend was on so that we could still talk but all he could really see from the bench was my head since I was submerged in the water at the moment.

It was pretty cold outside so I was trying to stay under as much as possible.  The lights in the hot tub were turned off so no one could really tell that one of the jets was pounding onto my pussy.  I was already pretty turned on from the alcohol, but this was just making it even more intense.  One of the guys got up, took the other girl by the hand and they both left the tub.

I had my head back and my eyes closed when I felt a hand on my leg.  I didn’t want to alert my boyfriend. So I slowly opened my eyes and looked over to the guy next to me.  He gave me a huge smile as his hand worked up and down my thigh inching closer to my pussy.  I hadn’t been with another man besides my boyfriend in a long ass time so I can’t begin to even tell you how much just his hand on my leg was turning me on.  I spread my legs apart more, letting him know that I wasn’t going to say anything, and actually encouraged more.

As I spread my legs my foot came loose from the bottom of the tub and went straight out to the guy’s leg in front of me.

I didn’t mean to do it but he didn’t seem to care.  He grabbed a hold of my foot and started to rub it.  Damn, I was feeling really fucking good.  He took my foot and placed it on his lap where I found he had no shorts.  Mmmm, my bare foot was pressed against his growing erection as the guy beside me slid his fingers into the leg opening of my shorts and began rubbing up and down my pussy.

I let out an involuntary moan and my boyfriend asked if I was okay.  “Oh yeah, I’m doing great!  This water feels amazing on my muscles after all of that dancing tonight!”  I quickly lied.  Well, it wasn’t a complete lie. The water did feel good, but I had something else making me feel MUCH better!!  I reached over beside me and took this stranger’s cock into my hand.  He was already hard as I wrapped my fingers around him and began stroking him.  His fingers slid into my pussy as the guy across from me was using my foot along with his hand to stroke himself off.

I could feel it pulsing under my arch as he unloaded into the water.  Fuck, that was hot!!  He released my foot from his grip and I gently moved it up and down his cock and rubbed his balls with my toes before letting it fall back to the bottom of the hot tub.

I wanted more from this guy with his fingers shoved deep inside of me.  I wanted his dick buried in my pussy, like NOW.  Then I turned my body around so I was facing my boyfriend and acted as if I did it just to talk to him.  But, when I did, my ass went straight toward the guy next to me.  He took the hint and eagerly but subtly moved behind me.  Although he started talking to my boyfriend and I like nothing was going on, he was rubbing his cock up and down my slit just waiting for the right moment to press it in.  He positioned it at my entrance and then pressed forward, holding out his hand to shake my boyfriend and introduce himself.

Slick, but I couldn’t stop myself from letting out a moan as he stretched my pussy around his cock.