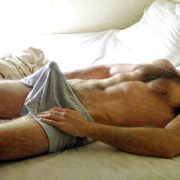 Hot Sex can happen when I’m in the mood to take care of a guy’s morning wood.

Morning sex is so much fun because you’re all cozy but excited to start the day plus you’re snuggled up in bed with a hot guy you went home with the night before. Well, that’s what it’s like for me on good mornings and this morning was a very good one.

Hooking up with Jaden last night we had drunk, sloppy Hot Sex. I remember most of it and when I woke up this morning I felt happy and relaxed. Rolling over I saw him lying there still fast asleep.

He was only wearing boxers and his morning wood was making them tent up. I thought about letting him sleep but then I thought about how good his dick felt last night, how long and thick it was and I stayed in bed wanting more Hot Sex again.

Slowly I pushed the covers onto the floor and carefully parted his legs. He moved a bit but didn’t wake up and I slid the leg of his boxers up to the side so his dick hung out of them. I held it around the base and licked the underside of his head, moving over it as I tasted him and breathed in his smell.

He moaned a little in his sleep and I slid my tongue up, licking around his head.

I closed my lips around it and sucked his head, going up and down as my pussy started to get wet. Going a bit lower I sucked the top half of his dick while I stroked the bottom half. Moaning louder he shifted as he began to wake up. He mumbled and I didn’t answer as I went lower, swallowing nearly his entire dick giving him oral sex.

Giving him long, deep sucks, I pressed my lips tightly around him as I got into a steady rhythm. I kept going and he sighed as he put his hand on my head. “Hey,” he said as he ran his fingers through my hair and I sucked him for another minute. I looked up at him and slowly slid his dick out of my mouth. “Hey, guess what I want? Guess I didn’t get enough last night.” I said and tugged down his boxers.

They were down by his knees and his spit covered dick stood up as I straddled him. I held his dick as I lowered myself on it and he put his hands on my hips. He held me as I slowly rode him, going up and nearly letting his dick slide out before going down again. His dick went in deep and it felt so good I couldn’t stop bouncing up and down on him.

My pussy was soaking wet and my clit felt like it was on fire as I kept ongoing. He held me tighter and pulled me down on top of him.

My tits pressed against his chest and I rolled my hips, fucking him hard and fast. He kissed me and I could feel his hand squeezing my tit. Bucking his hips, driving his dick into me I groaned as we moved together.

My pussy tightened around him and I ground my hips down, forcing him in deeper as my clit sent shocks through me. Grunting, his thighs smacked against me as we got more desperate. He came first and I kept going, using his dick until I came a minute later.