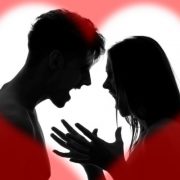 Have you ever had hot rebound sex Instead of Making Up?

So, what are your feelings on hot rebound sex?   Thus, some couples end up having a horrible fight during special times.  We often look back at earlier times and wonder why the arguments even broke out in the first place?   I’ve seen couples break up before Valentine’s Day so the girl went out and had hot Valentine revenge sex to get even with her man.  Their men looked back and admitted it wasn’t worth the lost time.  Subsequently, some couples used this break time from one another to figure things out and even let down their hair a little.

Like the time my then boyfriend, now husband plotted to go on a trip with some friends of his.  Rather than tell me the truth, he told me that he had a meeting that would take him out of state.  Social media busted Tony, as I saw a post from one of his friends which tagged Tony and all the friends who would be going on the trip.  Tony would later tell me that he didn’t think I liked fishing so he didn’t invite me.  To be honest, I think there was a hot girl that he was flirting with.  Later, when I saw pictures of her I was both jealous but could understand what he saw in her.

Still, hot rebound sex was far from my mind!

Of course, Tony and I fought bitterly about the trip.  So, the girl’s name was Onya.  She was stunning with long jet black hair that brushed beyond her ass.  Tony had a thing for hot ladies with long hair.  I was at home that night, feeling more than a bit lonely.  One of my friends named Lisa came over to invite me on a double date.  Her boyfriend Chad had a friend who was visiting from out of the country.  His name was William.  William was a hot hunk from England.  The thought of learning about life beyond our country both excited me and sparked my curiosity.

I was actually going to stay home when my friend Lisa showed me pics Onya had posted on her social media.  It showed pics of her in skimpy bikinis sitting on his lap and a selfie of them kissing.  Finally, that was the last straw!  I couldn’t take the hurt any longer.  Dashing to my bedroom I grabbed a slinky red dress, black bra and panties, thigh-high sheer stockings, and my new black heels.  I applied light makeup to my already beautiful face and combed out my long blonde hair.

There was no going back.

Moreover, I was not going to stop anything that may happen as a result of our fun tonight.  I joined Lisa and Chad at this restaurant on the beach.   My date presented me with a bouquet of lovely flowers and a light kiss to my hand.  William was both charming and handsome.  Soon, I forgot about Tony at least for the meantime.  The depth of William’s eyes made my heart pound.  All I could think about was his hands doing naughty things to my body.

My panties were so wet thinking about having him for dessert!

However, William had me for dessert.  After dinner, we split off with our dates.  William had a waiting car with a driver who opened the door for me.  This night promised to be unforgettable.

We went back to William’s hotel suite.  First of all, we took our time enjoying each other, wonderful cocktails, slow kissing.  When William finally stripped me of my garments he took time to worship each exposed area of skin with his lips and fingers, treating me every bit like a princess.  He licked, flicked, pinched until I came shaking violently and crying out my lust.  Instead of fucking me hard as many men did William took his time making love to me, watching my eyes as they opened wide with lust.

So how did things turn for the hubby?

Tony had a hot weekend with a cute babe who made him feel every bit the man.  Just joking!   On the contrary, when Tony came home he told me the grass was not greener on the other side.  He had a wonderful trip but a horrible time with Onya who turned out to be a crazy bitch from a textbook horror movie.  Let’s just say, Tony protected his ass for a long time and his penis was sore for weeks.  There are many more things that happened that I’d love to share with you.

Want some hot rebound sex?  Are you missing that spice in your life?  Feeling lonely call me for hot phone sex now.