I Had a Hot Daddy Dom for a While and I Became His Little. 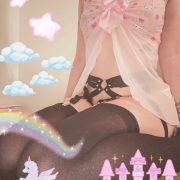 I did not even know what a Little was until my hot daddy dom showed me. He informed me that it was very similar to the ageplay that I do. He told me that often, there was a caregiver, and then there was a Little. The Little being sort of a child-like figure that sometimes even regresses psychologically and emotionally to the headspace of a child. I found this interesting and asked him what I needed to do to become a little because it sounded very up my alley. He told me to kind of tap into my inner child and do child-like activities such as coloring, and he would take care of me. He would brush my hair. When he witnessed my piqued interest, he sent me over a gift.

I immediately opened it, excited for my surprise.  It was a me-sized onesie. It had little feet on it and everything. At first thought it was lame, but then it did look awful cozy, and I knew it would please him to see me with it on. So, we agreed to meet at his place to do a scene, since he owned a ton of gear. Not my safest choice, meeting a random stranger that I found on a fetish website, at his house. But…also not the most dangerous thing that I have done either. He literally just wanted to make me dinner. I went over in the little onesie outfit, as instructed, and he showed me around his house. Then he sat me down at his table.

He made grilled cheese and tomato soup.

He handed me a bowl of goldfish, and he told me it was to put in my soup. I tried all of it, and it was delicious. Then, I sat in front of him on the floor, and he sat on his couch behind me. He brought out a brush and brushed my hair while we watched Moana. I quite enjoyed being a Little. The part became me so quickly.  I could be a spoiled princess all the time. Although, when I began teasing him, He showed me very quickly that my new hot daddy dom would spank me like a daddy too. His sorry ass wasn’t paying any attention to me, and I felt ignored for Moana. So, I kept flicking him with my hair tie. He gave me a warning look, but I wanted to test him.

So, I pushed my luck and continued snapping away. Finally, he grabbed the band out of my hands and yanked me onto his lap. I was bent over his knees, so I knew too well what that meant. He told me that I was going to receive twenty spanks, ten swats per cheek. I felt pretty scared as I did not know how hard the spanking was. And it stunk. Needless to say, I learned my lesson. My asss was all red and raw when he finished. One by one, he made me count them all out as he struck. By the end of the spanking, I was just a pathetic little mess in his lap. I flopped belly first on the couch and apologized.

He then unzipped my onesie and began playing with my pussy and rubbing my clit over my panties.

Then, he started fingering my pussy. When I was all nice and wet, he slid his cock in my tight slit while I was face down/ass up on his couch. Who knew I was so wet from that spanking! He lifted my tiny little hips and plowed into me with his thick cock. The scene felt very naughty, and I felt my pussy grow wetter and wetter! I felt the walls of my pussy wrap around his cock and begin to milk it. I came all over his cock until it was creamy all around. Finally, I felt so free, without a care in the world. I was completely satisfied as he pumped his warm load deep into my pussy. I was entirely content with me new hot daddy dom and ready to perform whatever he needed as his Little.