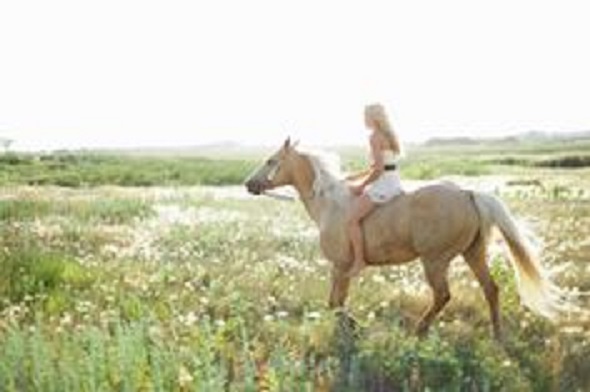 So, horse riding is something kids do at summer camp, right? Well, that’s what I thought, too. Oh, how naive I was…..

I decided to wide bareback one day so I could really connect with the horse. Feel the way his hips moved as he walked so I could match his movements. It was a warm, sunny day and the fresh air felt so good. The wind tossed my skirt around my hips and the breeze felt good around my uncovered pussy. We walked for a few miles at a slow pace, just enjoying the outdoors and the sunshine. Then it was time to turn in. It was starting to get dark anyway. I could barely see the horse I was on top of his coat was almost as brown as the freshly watered down dirt in the sunset.

I didn’t want to go home just yet so I grabbed a bucket and filled it with soapy water. Using a coarse brush I started washing him down. He probably needed to cool off anyway. The hay smelled so fresh and crisp and the barn was recently tended to so it smelled wonderful.

One of the guys that helped tend the barn came up to me with a hose and washed down the horse. He snorted and shook himself off. I took the hose and washed off his underbelly and I noticed something stirring down there.

The helper nodded at the horse. “You ever did it?”

I stared at him for a second, trying to figure out what he meant. “No,” I whispered, my cheeks starting to flush.

“Ever want to?” When I hesitated, he continued. “I can help you so no damage is done.”

I blinked and, of course, the gears in my brain started turning as I thought about it. His size would feel incredible. But, I’ve heard horror stories about such things so I never went through with my curious desires.

The barn hand laid out a silk cloth on a neat block of hay for me so I wouldn’t get scratched. I smiled my thank you, pulled down my skirt, and laid on the soft sheet. The hay felt so comfy underneath me. I closed my eyes as the man guided the horse where he needed to be…..

Afterward, I laid on that hay bale as the man led the horse to his stall for the night. I couldn’t believe I’d done it! It felt so good and I knew I’d have to do it again soon…..