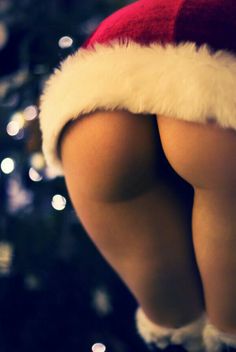 How can I be so Naughty, and yet so Nice?

First of all, a girl gets 364 days (365 in leap years) to think of all the filthy fucking she’s done and I’m no different.  For example, I’m not at all opposed to getting stuff for free in exchange for sexual favors.  So, blowing the mechanic for a new transmission in return is what I call the good old American barter system!  Can my old man afford me?  Sure he can but his bedroom antics leave me wanting so much more!

As a rule, I don’t try to be bad.  Although I don’t step out of its way, that’s true. LOL. However, this year was gonna be different. I had plans for Santa and the only way a bad girl can REALLY get white beard’s attention, is the be even WORSE! Giggle.

The days leading up to…

Now, we’re finally at Christmas Eve and I get jittery just knowing that jolly fat bastard is in the air and flying right towards me!  My pussy tightened, then gushed that clear, slippery wetness that only I produce.  It drives me nearly insane because I know Santa’s naughty secrets too!

Santa Claus is a panty-sniffer!

Yes, you heard me.  All closed eyes are NOT sleeping!  So, last year he was busted, only he doesn’t know it… yet! I’ve heard it said that he knows when you’re sleeping, but if he did he might NOT have taken my panties, still warm from my body, up to his nose and inhale deeply.  He’d have known better than to be in the same room with me sleeping naked when he rode that gloved hand over my curves. And he surely would have known that behavior would garner HIM on the BIG NAUGHTY LIST! Giggle.

So, as I heard the jingle of reindeer bells on my rooftop, my pussy started to drip.  I waited until I heard the thud signaling his arrival before creeping up to the roof in my sheer nightie.  The animals smelled my pussy before I padded barefoot toward them. Simultaneously, their collective dicks stiffened and made their way out of fury sheaths and into my sweet smelling cunt.

He climbed back up the way he’d entered and stopped in his tracks to watch me pleasuring his flight team.  And not to be outdone… I beckoned Santa towards us.  In the meantime, those wet-nosed helpers came deep inside me (front and back) one after another until it dripped down my thighs.

As Santa pulled himself into his plush seat I saw it!

My La Perla tap pants.  They’re one of my favorite pairs of eXXXpensive panties.  I was just about to yell out, “Oh, Santa!  Are those my panties sticking out of your pocket? Naughty boy!” But, I thought better of it.  There’s always next year… Right?