Girl Nextdoor Is A Homewrecker: Seducing My Neighbor 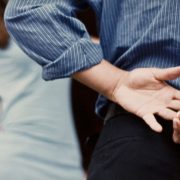 But after a while of being with him, it started to get a little stale. Same old sex. Sure, it was fun; it was always rough. I loved how it still felt like he stretched me out a little when he rammed it in.. but, I was sick of fucking the same cock. So, naturally.. like the teasing little slut that I am, I kind of got a crush on the neighbor. It was the easiest bet I ever made. I was his sexy girl nextdoor, and the poor man was probably on the same boat I was in. His wife was pretty fun, and sometimes we’d have them over for dinner and vise-Versa, just hanging out and doing shots.

They weren’t much older.

So,  we became fast friends. And Nick, her husband, started to catch my eye. Hell, he’d caught my eye since day one, but I was too busy flirting with my own man to get sidetracked. That is, until now. It wasn’t until one day when both Marcus and Nick’s wife were out that I decided to try this out for the first time. Could I lure that cute neighbor into my bed? Or would he let me in his? Could I be the homewrecking girl nextdoor that he had an affair with? I wanted to be a cheating girlfriend and finally do everything I craved. Instantly, I put on some tight, painted-on black jeans and a silky red, barely-there tank top and made my way over.

I visited him under the pretense of asking how everything was going, mentioning it was a boring day.. making typical small talk. He bought it and let me in without a second thought. His wife and my boyfriend would be out of the house for hours. We had nothing better to do, so we started up some silly action movie to kill the time. But not even halfway into the movie, when the tension was building up in some nameless scene, I made my move, crawling into his lap with my legs on either side of him.

I knew I shocked him.

He didn’t really know what to do.. but as soon as I leaned in, he went for it, scrambling to pause the movie while his lips started wandering down my chest, his other hand pulling up the tank top slowly. I was finally going to fuck the neighbor I’d had a little crush on for so long.. and apparently, my lust wasn’t unrequited. He wanted to fuck the hot girl nextdoor. I wanted to be a homewrecker. The clothes fell off in a matter of seconds; we didn’t even bother going upstairs. I wanted him to fuck me right then and there. He was so attractive and forbidden that I wanted him to slide his thick cock right into my pussy so I could feel something different, something I wasn’t supposed to have.

I found a new hobby for that summer. He was such a fun guy. I wanted to come over or invite him over and invite him every day. His cock was massive, and sometimes I couldn’t help myself. Do you know how many hours I spent stripping down in my bedroom window so that he could watch me? His attention was all mine, and so were his affections. After a while, I even thought about bringing some of my friends over for him to play with. After all, he was definitely an experimental kind of guy.

When he fucked me, he always went rough.

And I loved it. I needed a big, rough cock. God, I grew sick of my boyfriend’s weak, small cock, and I needed something to really pound me! I needed something big and thick and mean. I spent years playing with the same guy. It was enough for me. I grew thoroughly bored with him. That’s why I craved Nick’s cock so badly. He thought I was a cheating wife since he didn’t know I wasn’t quite married yet! And his wife has no clue that he was sleeping around with me. It was a lust-filled summer, and we definitely made the most out of our affair.