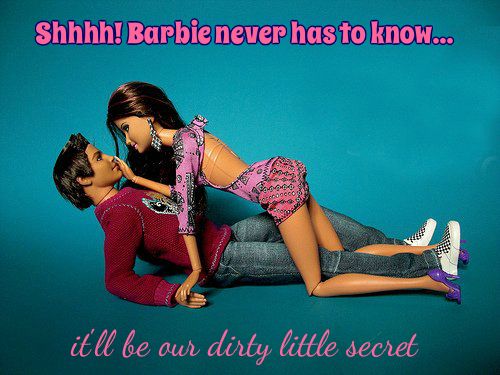 I discovered something interesting this weekend:
I am a natural-born homewrecker!

She prompted my memory, reminding me of how I never played with Barbie. I was always Barbie’s friend Whitney, the brunette doll that was quite a bit more vixenish than the cute little blonde-haired doe-eyed Barbie! And while her Barbie drove the ridiculously precious PINK Corvette? Mine always drove the kick-ass black one. Her Barbie lived in a sweet little white mansion, while my street-smart contemporary Barbie lived in a townhouse in the city!

AND! Most importantly, MY Barbie was never, EVER married!

She wore expensive dresses, fur coats, and was always flirting with Ken and getting him into trouble! On more than one occasion, after Barbie went to sleep, Ken would sneak over to my townhouse; take the escalator up to my bedroom, and fuck my brains out- then sneak back home and get into bed with Barbie! The next day, I would always take Barbie out shopping and model hot lingerie, knowing that Ken would be tearing it off of me with his TEETH later on!