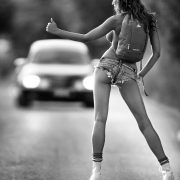 These desperate hitchhiking teens have no way out.

John looked at me as if everything was completely normal and this was his average weeknight adventure. I think that scared me the most. Amber was sobbing through the bloodied makeshift gag but didn’t dare try to spit it out. I had read about hitchhiking teens who had been kidnapped but for some reason, I felt safe when traveling with another girl. This was not safe. This was starting to look like my worst nightmare. John was still looking at me but when I didn’t return his gaze he grabbed my arm and forced me into the seat next to his.

I had no choice but to sit pressed against his body as I listened to the pathetic whimpers coming from the backseat. We started to drive again without a word but all I could think about was whether or not we’d make it out alive. Probably not. All of a sudden his rough palms were on my thighs and quickly moving up my skirt. I tried to push his hand away but John was too strong and easily overpowered me. He shoved me onto my back laying across the front seat so he could see under my dress.

John quickly pulled off my favorite set of panties and stuffed them into his shirt pocket.

My entire body was shaking as I felt his calloused hands scratch up my thighs. He shoved a rough thick finger inside my young virgin cunt causing me to scream in pain. John slapped my cunt hard over and over again until I finally bit through the pain. He looked over at me and spit on my trembling body. Pretty soon we stopped again, but there was nothing in sight except trees. He got out of the car and shut the door before I could try to run. Instead, he pulled Amber out of the back of the truck and removed the panties from her mouth.

She immediately started screaming as loud as she possibly could. She didn’t even see him swing at her. As soon as he hit her she was down and we were left in silence again. John stood there for a very long time staring at her limp fragile body before coming back to the truck and telling me to get out. I was sure he was going to kill me. I knew he was. My whole body was shaking as he tied my wrists and ankles together. Instead of killing me though he sat me down a few feet from Amber. The next thing I heard was the sick sound of a zipper. John rolled Amber onto her back and straddled her body before starting to stroke his cock. He slowly slid it into Amber’s mouth and smeared her own drool over her pale face.

John did not last long.

He jerked his member off onto my best friend’s lifeless body until he blew his thick creamy load all over her face. She didn’t look like the same beautiful girl I came with. She wasn’t supposed to be one of the hitchhiking teens who didn’t go home. John looked at me and walked over slowly, pants still around his ankles. Without a word, he began to piss on my face and chest- soaking my sundress. Just like that, as if nothing happened, he climbed back into his eighteen wheeler and drove off, leaving me tied down, soaked in piss and laying next to a corpse. We weren’t found for two days, but I was thankful to still be alive. I never saw John again and he was never found. Sometimes I wonder how many idiotic teenage girls climbed into that truck just like me.