Hitchhiker Rapes Girl Who Picked Him Up In The Woods 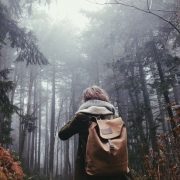 The classic warning story: hitchhiker rapes girl who fell for his trap.

A hitchhiker rapes girl story is something you hear about on the evening news all the time. You know how the tv stories go. Everyone always says to not pick up a hitchhiker. especially if you’re out in the middle of nowhere. There are several types of stragglers that they like to describe. Sometimes they talk about the drugged-out looking rocker-wannabes that go from town to town looking for a gig. Other times, the warning stories tell you about the hippie-looking younger crowd that just want to use it to sightsee and travel across the country.

My mom always loved to warn me about the scraggly looking older men on the side of the road. I was raised in Los Angeles so I never got to experience a desolate highway with a stranded person walking alongside the road, until I moved. People constantly warn girls not to pick up hitchhikers, and the stories usually said don’t hitchhike in the first place. The road is a lot more dangerous for a stranded woman and there are a million porn videos of this story. The stories all suggest hitchhiking women get extorted for sex. However, that’s a different story altogether!

This time the roles were reversed.

I love driving in the summer. It’s simple, the weather was just right with a big blue sky and an extensive skyline lined with trees. I was off, having fun and driving around, kicking up dust on the highway just to explore and disconnect from my plugged-in life. I’d set my phone on airplane mode just to help feel a little free, so that I wouldn’t keep checking it every five minutes. As the day passed on, I kept going. I was running around at night and feeling the night air through my fingers. Then, on this backwoods two-lane road, stood an older man that looked like he was just out for a walk.

He was just walking along with a backpack, a small, scruffy hint of a beard, and what I thought was a walking stick. He didn’t stick his thumb out like a hitchhiker, he was just walking along and turned to wave at me from a distance. I didn’t realize he was waving me down, I thought he was trying to give me a warning about something up ahead. I knew all the stories: don’t pull over. Don’t pick him up, don’t slow down. He could just find a gas station or something if he needed a ride. It was too late for a girl like me to be picking up strangers and I could end up on another ‘hitchhiker rapes girl’ headline.

But before I could listen to myself, I’d pulled over.

I didn’t unlock the doors yet, but I rolled down the windows to see what he wanted. He gently reached down to open the door, so I unlocked it for him out of sheer habit. Then, he casually climbed into the car and sat down on the passenger seat. It happened to naturally and fast that it took me a second to realize he was not out there to tell me something, the man needed a ride. Unfortunately, I’d already let him into my car and I was far too nice to just kick him out. He looked like a sweet older man and reeked of the woods as if he’d been walking all morning.

He started flirting immediately. Something about him was very attractive, even if older. He had an anchor tattoo on his arm, and I think I only noticed it because I was partially freaking out about suddenly picking up a stranger. My brain was running through the motions of things to notice, in case he robbed me or something. I didn’t think it’d turn into a hitchhiker rapes girl story, like every other month on the evening news. However, he didn’t look like he meant me any harm. He was being super sweet, sometimes letting his hand lightly brush against mine as I was shifting gears. I was gently pushing his hand away from mine.

The ride was enough of a surprise, and suddenly it got bigger.

After a while, he told me to take a right turn up ahead. I did so without questioning it since I meant to go down the same road anyway. It was a very curvy road that leads past some residential areas and eventually into the woods. I was out there to have a fun, speedy, adrenaline-filled ride. With all the buildings in between, I assumed he’d want me to stop at a church or near a house or something, but he let me keep going into the woods. Finally, he asked me to stop just outside a state park’s parking lot. I eagerly brought the car to a stop.

I didn’t realize that the parking area was desolate. Only one other car parked there, so I could assume it was his. His hand was now on my thigh, and trailing off to play with my shorts. He hardly waited for a verbal queue before sliding his fingers down the front of my little denim cut-offs, reaching my clit with precision. I jumped from surprise, but that made him get a little closer. He had a game plan for the entire event in his head. With expertise, he swept his door open with one kick, stepping out carelessly since he had already ninja’d the keys out of the ignition.

He closed the distance and pulled me out of my seat.

He shocked me. I was stuck in the moment and didn’t think to reach over and lock the doors. After all, I couldn’t do anything or run away since he had my keys. His voice turned a bit raspier and meaner in tone as he spoke. “This is what you get for being a fuckin’ cock tease.” As I began to protest it, he shut me up immediately with a slap across the face. The same hand quickly went down to my hips, using them to piston me around and pin me against the car. I could think about only one word – ‘fuck’ – in varying tones of distress. Who the fuck was going to hear me out there? Who the fuck was going to save me?

No-one. The park was desolate. No one else had parked there. I assumed it wasn’t one of the favorite hiking spots. He knew what he’d done, and planned it out carefully, like a fisherman waiting for some dumb girl to bite his bait. His hitchhiker rapes girl fantasy was coming to life without any obstacle. Next, I felt his cock slide up against me, and I realized he’d pulled my shorts down far too easily. He’d done this before, he hadn’t even had any trouble with the zipper, belt, or button. His cock jammed into me – and not where I expected it, either. He went for my ass. The dirty old hitchhiker rapes girl story wasn’t just a classic anymore, it was my experience, and he’d even added a little bit of anal rape to it.

I tried to fight him, but he put his hand around my neck.

“Don’t even try it. I’ll make it worse.” I followed his warning without really questioning it. After all, I’d done that before. I was always the adventurous type and a little too brave. So I had a couple of rape experiences in the past that I never told a soul. This would just be one more guy living out his taboo phone sex dream and making me his perfect little experiment.