I Hit You, So You Can Hit Me ♕ 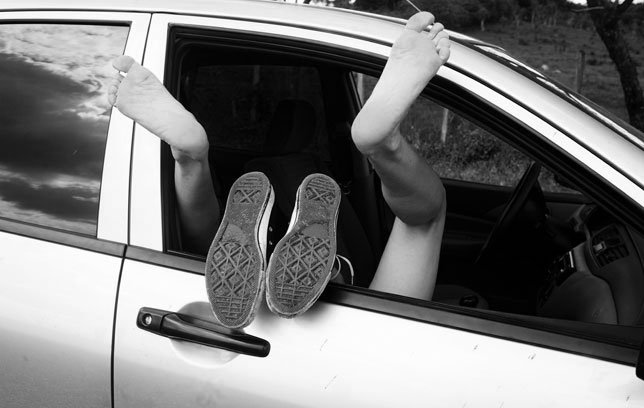 I Hit You, So You Can Hit Me

Okay, first off guys. Do not go walking out into the middle of the road. Do you want to die? Because that’s how you die. This guy was lucky in more ways than one. My car insurance was behind in payments so it was not active at the time of the accident. This guy walked out right in front of me. I slammed on my breaks. I barely hit him. It did not even knock him down. But still, he acted like a little bitch about it. He was saying he was going to sue me and all kinds of other bullshit.

So I did what I did best. I offered him a deal. A deal that he could not refuse. When he started yelling and slamming his fists into my car. I checked my face in the car mirror, made sure my tits were propped up and stepped out of the car. Oh, let me tell you how quickly he went from yelling, to a quivering little baby when he saw me. I smiled and puckered my lips at him. He immediately changed his tune. He was not about to miss a chance at my pussy. I motioned for him to get in my car. He gladly got in.

I drove him to a secluded place. When I turned the car off he instantly tried to feel me up. I threw his hand off of me. I knew he would do anything for a taste of this pussy. He was a gangly business-looking nerd. Putting it nicely. I bet he has never been laid in his life. I was about to make him my slave. Laid back against the car door, propping my legs up. He tried to go for me but I kicked him away.

I moved my panties to the side and laughed at him. He started to beg like a little puppy. I just kept laughing at him. I told him that if he wanted me he better have a big dick. So, he shyly pulled down his pants and showed me the smallest dick I have ever seen. I started laughing uncontrollably. Making fun of his tiny dick.

He just sat there and begged for my pussy, so I finally gave in. I let him fuck me…well I guess you could call it fucking. I could not even feel his dick it was so small. After a pathetic attempt of trying to please me. I finally had to let him titty fuck me till he came. He was exhausted when I dropped him off at home. I have him one last sensual hug as he was leaving. As I got in the car I had a big smile on my face, as I held his wallet in my hand. It was full of money. The first thing I did was take myself to the sex shop to find a toy that would actually get me off on the way home.

Want to know what I bought myself? Call me for Humiliation Phone Sex