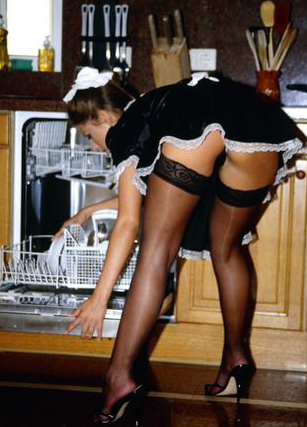 I’m competitive in nature. It’s a thrill for me! I’m the kind of person who likes to win at all costs, although sometimes I don’t. I also happen to love sports, so a lot of my really close friends just happen to be guys. We always end up crazy bets about whose team is going to win what game. Last year, for the World Series, I was sure the Royals were going to win, so I bet my friend Paul. If Paul lost he had to whatever I want it for a day. If I lost I would do whatever Paul want it. I would never think I’d be Paul’s slutty maid for a day.

Everyone that knows what happened, knows that the Royals lost. Paul rubbed it in my face all he could. It was almost impossible that the Giants would win, again. None the less I was ready for my punishment. Paul told me to get to his place really early.When I arrived to Paul’s place I immediately noticed it was a mess. What had I gotten myself into? I thought. On his couch, there was a maid costume, the slutty kind. He said I needed it to change in it. I started to walk into the bathroom and he said I needed to change in it right in front of him and to make sure I didn’t wear any panties. I knew Paul had a thing for me, but this caught me off guard.

I ended up cleaning Paul’s apartment in my slutty outfit. It was really sheer, almost like lingerie. Paul didn’t take his eyes off of my bare ass when I bent over. I would pretend I wasn’t looking but there was one thing I couldn’t ignore, his huge boner. His cock was bulging through his cargo shorts. When I was done, I walked up to him and told him so. He was sitting on his couch, and I sat right across from him on the wooden coffee table. He said to get on my knees and I obeyed. He unzipped his shorts and pulled out his cock. I was about to start stroking it, when he stopped him and said maids don’t get to enjoy their bosses cock. They only clean up after them.

Anyone have any favorites for this year’s world series?