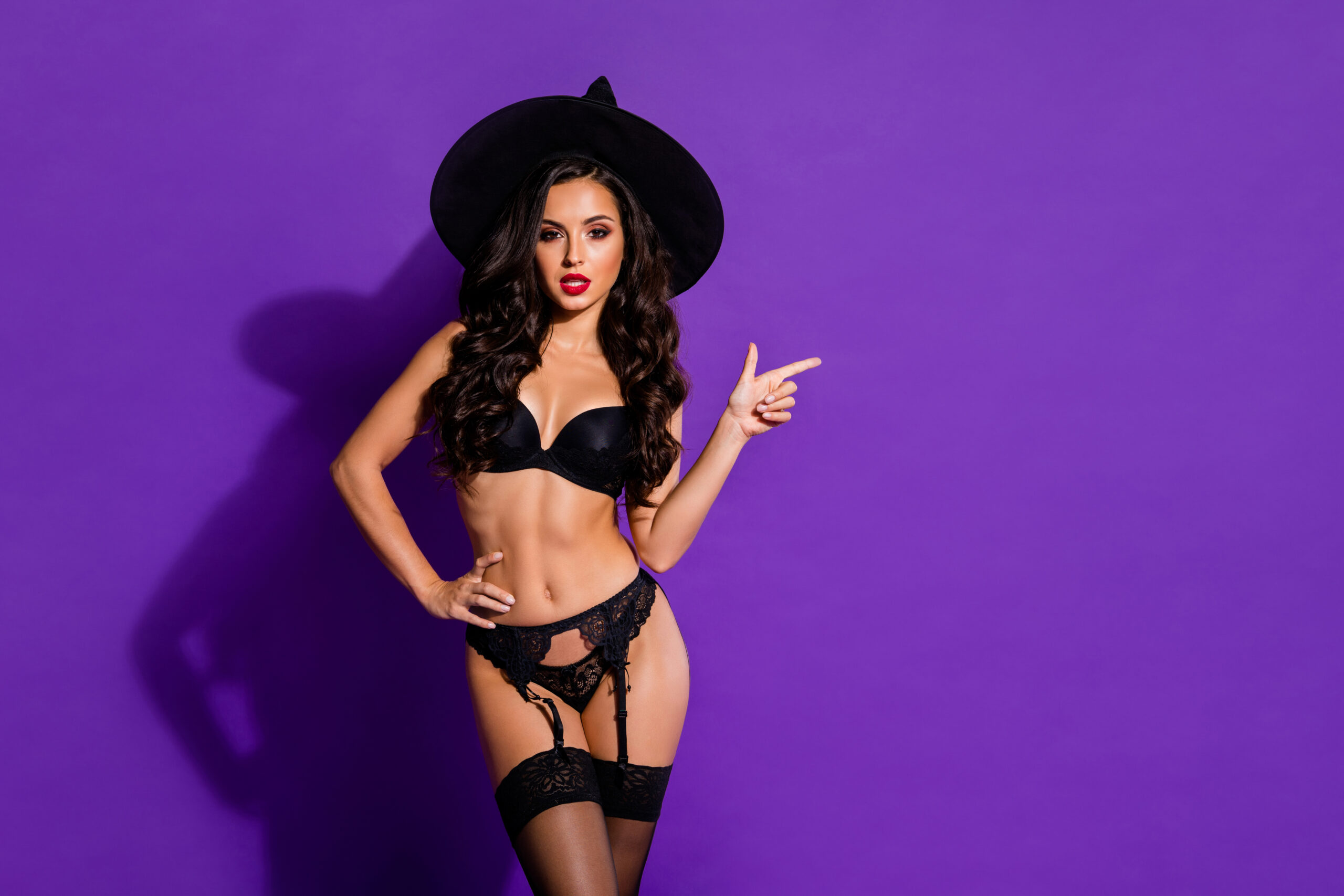 It’s a tradition for my friends and me to go to the haunted houses each year just before Halloween.  The thrill of the scare is amazing and I just love fucking with the people that are dressed up trying to scare us.  Because of that fact, I’m usually the one at the end of the group as we make our way through the house since I would be the one they try to follow around.  I’ll just make some smart-ass comments about hiding in the dark and, of course, it always has some kind of sexual innuendo.  But last year, I fucked with the wrong person, or maybe I just took it a little farther than usual.

We were walking in the dark down a very slender hallway when I felt someone breathing down my neck.  I turned my head a little to take a look and found a guy that was maybe in his early 20s in all black, with a little bit of makeup on his face.  He didn’t move, but gave me a wicked smile and said, “Mmm.. you smell good enough to eat!”  I laughed and said, “Oh, but baby, we just met.”  “You think that matters, bitch?” he replied.  “Oh, it’s like that huh?” I started, “Well, don’t call me a bitch unless you plan on riding me like one.”

Ok, so I couldn’t help myself.  Apparently, he couldn’t either.

He put his hand over my mouth, grabbed my arm, and pulled me behind a black curtain that I didn’t even realize was there.  “Oh, we’re gonna ride you, I promise you that.”  He said.  I thought he was just fucking with me, but then I remembered, they aren’t allowed to touch you.  Oh shit, it was too late for me to get my friend’s attention we were now in some back corridors of the haunted house.

We came to the end of the hall where it opened up into a small room.  There were no windows and the walls were covered in black cloth so I had no idea where the doors even were if I wanted to try to escape.  I am a pretty kinky girl though, so I have to admit, this whole situation was getting me so fucking turned on!  He took me into the middle of the room and picked up his handheld radio.  “I have a surprise for any of you guys that aren’t busy at the moment.  Meet me in the black room,” He said.

Oh damn, this just got even more interesting.

After a few minutes, the curtains around the room started to move all around me.  In walked four guys, all dressed up in either costumes or all-black clothing.  “Oooh, you found a sexy one,” one of the guys said as he began fondling my tits.  All at once, they began pulling at my clothing until I was stripped naked.

One of them lifted me up so I was standing with my ass in the air, bent at the waist so I could continue to please everyone else.

He spread my cheeks apart and I could feel his breath on my wet pussy.  He had to be less than an inch from my slit.  “Mmm..you smell good enough to eat.”  It was the man that started this whole thing with those same words in that dark corridor.  I removed the cock from my mouth and said, “Well, that’s the second time I’ve heard that tonight. What the fuck are you waiting for”?  He gave a little laugh and buried his face and tongue in my dripping cunt just as my mouth engulfed another cock.  I needed more…and I knew they were going to give it to me.  He stood and rammed that thick cock deep inside of me causing my face to move forward taking that cock even deeper into my throat.

“Where the hell have you been Brooke?” one of my friends asked.

“Oh I got separated from you guys somehow, then lost in the hallway maze.  This nice man helped me find you guys.”  I smiled up at him and he gave me a wink.  Before he left I said, “I’ll be back next year.”  “I know,” he said, “you’ve been teasing us for the past two, we were waiting for you to come back this year so we could teach you a lesson.”  “Is that right?” I asked. “Well, I’m not sure what the lesson was supposed to be, maybe we need to work on it a little more.”

I giggled and turned back to my friends as he disappeared back into the shadows. It’s almost time for my traditional haunted house trip.  In two more days, I’ll be making my way through those dark hallways.  Give me a call, tell me what you think I should do this year. I’ll tell you what I have planned so far.  I guess you could always just wait until after Halloween and I’ll tell you what went down but wouldn’t you as that sneak peek?  I’ll make your ideas a part of my secret haunted house fun!