Hardcore Sex And Turning My Sissy Into A Prostitute* 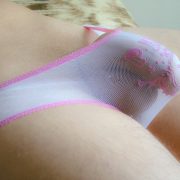 I’m not the only one who loves Hardcore Sex.

As long as she gets Hardcore Sex she’s happy.

She loves telling me about Hardcore Sex and all these gross losers she meets online and I thought that if she’s getting all this dick for free then she must appeal to a certain type of guy. Well,  I don’t want to know who but I guess everyone’s got their kinky sex stories.

I asked her if she’s ever thought of charging these guys after all, most of them are in their 40’s and 50’s and have jobs. Couldn’t she be like a weird sugar baby or something?

She blushed and said they didn’t like her that much. There were lots of prettier sissies out there besides that’s like being an actual whore. Callie said she didn’t know if she wanted to do that.

I told her she was already getting lots of action and that I was going to set her up with a fat, ugly guy who was stupid enough to pay her for sex. She said I’d find no one and I said if I did then I’d keep the money he gave her. It was a fucked up bet but it was fun because I got to help her pick out a couple of cute outfits and took some pictures.

Setting up a profile I got like ten guys who were interested. I priced her cheap-ish and Garret seemed interested because he agreed to pay and meet us at a hotel after we skyped with him.

Her dick was bulging out the front of them and she rubbed it through the panties before crawling on the bed. She knelt on all fours and pulled her panties down to her knees as he got behind her and rubbed his dick between her cheeks. A line of pre-cum dripped on her and she reached behind her, spreading open her hole.

Callie’s dick was hanging down between her legs and then I heard her cry as he shoved his dick into her.

I watched as he thrust in her gaping hole and started fucking her as I counted the money. It was all there and I couldn’t believe how easy it had been. He grunted as he pounded her boy pussy and I thought about the other guys who’d messaged us. If they were serious too then I might have a naughty little side job.

I think my sissy is going to be one hell of a prostitute if I can convince her to keep doing this.