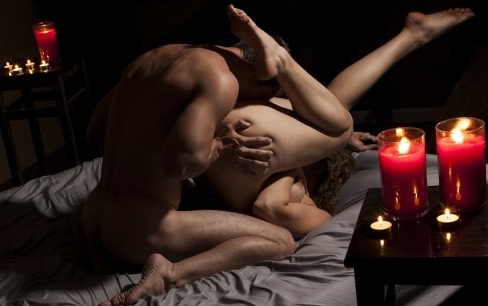 A few months ago I went out with a guy who liked playing with wax. It was a new experience for me and it had been more fun than I thought it would be. He poured hot wax all over my naked body and it felt good. I never got the chance to do it to him though and it was something I wanted to add to my Been There, Done That sex list. I just want to do every dirty, fun, kinky thing I can think of while I’m still young and tight, you know? So I called him up but I just got voice mail.

It was his loss because I don’t wait around and tried someone else. Jeff did pick up and I told him what I wanted to do to him. He had never played with wax before but was willing to do whatever I wanted him to and we agreed on when to meet.

I got to his place just after 8. I was eager to try something new and couldn’t be bothered with chit chat so we went straight to the bedroom. He already had lit candles ready for us on the bedside table. We quickly got undressed and I pushed him down on the bed. I told him to stay put and went over to my handbag. I took out a pair of handcuffs and put them on him. That alone was enough to drive him wild. He started breathing heavier, his eyes got that stupid dazed look men to get when they’re horny and his hard dick bobbed in the air.

I picked up one of the candles and let a small drop of wax fall on his chest. It landed beside his nipple and he gasped from the pain.

I leaned down and licked his chest close to where the wax had fallen. A little pleasure after a little pain. He felt warm and firm under my tongue. I lifted the candle again and let a few drops fall. He cried out as each one hit his skin. I ran my fingers gently over him, soothing him. He moaned deeply. I moved the candle down his stomach, letting drops of wax form a line to his belly button. I could see his dick twitching out of the corner of my eye. Then I tipped the candle over so more wax could fall on him. He cried out loudly and I wondered if the neighbors could hear him.
I swiped my finger over his dick, picking up the drop of pre-cum that was hanging there. I put my finger in my mouth and tasted his saltiness. My arm brushed against his dick as I moved the candle slowly over his lower stomach. The wax dripped on him and cried out in pain. I put the candle down and brushed his dick again. He pushed his hips up and begged me to fuck him. Then he told me he couldn’t wait anymore; he had to have me. I let him beg for a few minutes. I’d wanted to ride him since I put the handcuffs on him but I didn’t want him to know that. I played hard to get for as long as I could then gave in.

I straddled him and slowly lowered myself.

The wax had dripped down to the base of his dick and was starting to cool. Could feel it on my lips as I sat down on him, his dick deep inside me. I moved up and down slowly. I liked having him slide nearly all the way out before taking him back in. He pushed up unexpectedly, desperate to get back in me and hit my clit. It was great to have a guy find it so quickly and I wasn’t going to let this rarity go. I told him to stop moving and tried to stay in the position I was in. I rode him hard and fast. So I came before he did, yet another victory for me. He kept pushing up into me as I tried to catch my breath.  Finally, he came and I felt his cum fill me.
I climbed off him and undid the handcuffs. I got dressed and left him to clean himself up.