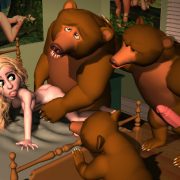 Even though she appeared happy, in truth she needed something so kinky it would have shocked the villagers around her.

Goldilocks searched every day for a way to satisfy her dirty cravings. She trudged along the countryside, traveling up and down hills before she came across a cottage. It was curiously shaped and made her nipples perk up with interest. She went up to the house and gently knocked. There was no answer, and she slowly stepped inside.

What she saw made her gasp. Three bears were sleeping on three cots, each different in size to accommodate them. However, what interested Goldilocks more about this unusual scene were the massive cocks that jutted out from under the blankets. It was morning wood; strong and glorious, just how Goldilocks loved it.

She examined them more meticulously. One of the bears must have been the father and appeared to be the eldest. Mama Bear had undergone surgery to turn into a powerful kinky shemale. The youngest bear looked to be a cub but still had an impressive hard-on.

She tapped her foot on the floor, waking the bears up. They all jumped, revealing their cocks for her to see. She licked her lips and began talking to calm them down:

“Hey, it’s me, Goldilocks,” she said cheerily, “I mean you guys no harm. There’s just something I want and I think you can give it to me.”

Papa Bear gave her a suspicious look. “What?” he hesitantly asked.

The bears all got up and stared at her with excitement and curiosity. “What do you mean?” Baby Bear asked.

All three bears chose their appropriate hole. Papa Bear chose her asshole, while Baby Bear began thrusting into her vagina. Mama Bear pushed her new cock into her mouth.